The Voice of Immigrant-Serving Nonprofits in the 2012 Election 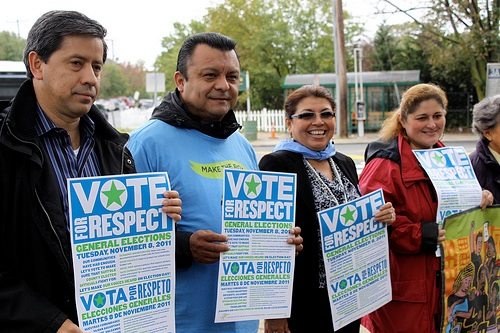 The work of thousands of nonprofit organizations that registered and mobilized millions of immigrant voters received less media attention. George Pillsbury (2012) drew attention to this type of nonprofit work in his fall article on an agency-based approach to voter engagement. He argued that this approach shows promise because it is: integrated and less expensive, more personal, scalable, mission-based, and continuous.

Whether this approach actually works to increase voter turnout has vexed researchers (summarized in Gerber and Green, 2008). Many tactics, particularly those used by traditional political parties that rely on simple phone calls or direct mail, fail to change voting patterns, especially for low-propensity voters. But more recent experimental research by Bedolla Garcia and Michelson (2012) shows that certain get out the vote (GOTV) efforts by community-based nonprofits offer great promise. When nonprofit organizations communicate with a likely voter in their preferred language by using multi-lingual volunteers and follow-up phone calls, there is evidence that that potential voter’s likelihood of voting increases—in some cases, by double-digit margins. Most recently, Kelly LeRoux (forthcoming) finds that nonprofits that engage in voter mobilization can increase turnout among their constituents.

Given this evidence, what are the barriers to more nonprofits, particularly immigrant-serving nonprofits, from engaging in electoral activities? This article draws on interviews with the leaders of more than 50 national, state, and local immigrant-serving nonprofit leaders during the 2012 election. The findings focus on four challenges faced by these leaders: new regulations, funding, new technologies, and intra-constituents differences. Successful nonprofit leaders have sought to overcome these challenges with clever tactics. While these tactics are designed for their unique circumstances, other nonprofit leaders can draw lessons from them.

Since the 2008 election, legislators in 19 states passed changes to state election laws (see this report from the Brennan Center for Justice). Deemed voter ID laws by proponents and voter suppression by opponents, these laws restricted early voting and standardized what types of identification would be accepted to register and then vote, a potential impediment to older, first-time, and immigrant voters. Fearful that immigrant voters might lack new forms of acceptable identification, some nonprofits encouraged constituents to take advantage of early voting procedures. Doua Thor, executive director of the Southeast Asia Resource Action Center (SEARAC), said that “a lot in our community don’t speak English, so early voting or mail-in voting is good particular[ly] for seniors in our community.”[i] In Arizona, a hostile political climate toward immigration also resulted in new voting requirements, but according to Leticia de la Vara of One Arizona, “Our way around this is to use the voting-at-home provisions of Arizona’s law.” She explained that the organization knows when mail-in ballots are sent out, so they can communicate with their constituents to say, for example, “‘Hey we know you got your ballot, here is information on the closest polling place.’”[ii]

In addition to changing the ways that individual voters could cast their ballots, some of these laws had a direct impact on nonprofit organizations. In Michigan, for example, legislators sought to amend their voting law to require nonprofits that registered new voters to comply with new regulations. An organization would have to register with a state agency, submit information to the state on all individuals who were registering voters, and complete a state voter registration training program. Michigan Gov. Rick Snyder ultimately vetoed this voter registration drive bill, but the efforts were indicative of the volatile environment in Michigan for nonprofit voter engagement activities. According to the Brennan Center, restrictions on voter registration drives passed in Texas, Florida, and Illinois, creating new hurdles for nonprofits.

For some nonprofits, these antagonistic policy changes stoked their enthusiasm for voter engagement, but available resources constrained how active they could be in adding new activities to their operations. Voter engagement work can be expensive and time-consuming, and it can necessitate expertise that many nonprofits simply lack. Cognizant of this, several national and state-level efforts have been launched to help nonprofits. For instance, in Illinois, the Illinois Coalition for Immigrant and Refugee Rights (ICIRR), an umbrella group of other immigrant nonprofits, developed an electoral fellows program to embed a temporary staffer in an organization during the election to work on civic engagement. Because elections are cyclical but infrequent, it is difficult for many nonprofits to staff electoral activities in a regular fashion. Short-term fellowships offer a way around this dilemma, particularly if a larger group such as ICIRR helps subsidize the salary.

In addition to staffing needs, other nonprofits simply lack the expensive tools to do voting work. Recently, major foundations have coalesced around projects such Grantmakers Concerned with Immigrants and Refugees and the Four Freedoms Fund. These coalitions coordinated the work of hundreds of philanthropic foundations to support election-related activities. In particular, nonprofits that wanted to gain access to new databases with voter information could apply to be a part of a State Voices table through their Tools for All Fund. Without this external funding, many nonprofits would not have had the opportunity to mobilize voters due to a lack of key information and tools to identify where eligible voters live and how to reach them.

In some circumstances, funding has allowed for nonprofits to utilize new technologies. Navdeep Singh of the Sikh American Legal Defense and Education Fund (SALDEF) argued that, “Technology is one of the biggest reasons we can do what we do. It has transformed advocacy. We now have the ability to send targeted e-mails, web-streaming the [candidate] town hall, webinars on training for voter education and registration—things we would have not been able to do just a few years ago.”[iii]

One of the leading-edge technologies in 2012 was the Voter Activation Network (VAN), available on a subscription basis through Catalist, a for-profit company formed in 2006 to harness voter information for progressive causes. If an immigrant-serving nonprofit paid for access, often through an external grant or participation in an electoral coalition, they would have the ability to search, sort, and organize the names of nearly every voter in the country. The VAN database has obvious information on names, addresses, and phone numbers, but also nuanced information on ethnicity, language, and propensity to vote. In theory, an immigrant-serving nonprofit organization focused on the Filipino-American community in Northern New Jersey could create a list just of registered Filipino-American voters in a specific congressional district and efficiently call just those voters. John Albert of the New York-based Taking Your Seat, who used this technology during the 2010 re-districting process and again in 2012, said, “Now I can click on a block and get the demographic information for that block” and he can then choose the right neighborhood meeting place to locate a voter registration table.[iv]

But the VAN was insufficient to meet the needs of other immigrant-serving nonprofit organizations. Despite its widespread use, the varied nature of certain ethnic names rendered the labeling of names nearly worthless. One interviewee said, “VAN is completely useless for the Asian American community,” in part because of the naming issue, but also because of the residential mobility of some segments of the community. That is, some addresses and phone numbers were changed too rapidly for the database to keep up. In one New Jersey congressional district, Salah Mustafa coordinated a coalition of Arab-American groups to register and mobilize voters in the Democratic primary between Rep. Bill Pascrell and former Rep. Steve Rothman. Mustafa said, “They gave us every name, everyone registered, but it took about three weeks of work, going name by name, sorting the data, cutting the data.”[v] He organized volunteers from several Muslim communities with the language ability to distinguish and code Bosnian, Turkish, and Pakistani names that the original database had not correctly labeled.

Lesson 3: Capitalize on technology, but be skeptical.

One of the chief challenges facing many immigrant-serving nonprofits is the cultural acceptance of advocacy and political engagement. Some communities are steeped in traditions of political activism, while others are dubious and even suspicious of politics. Kathleen Fernicola, policy director of the Asian American Institute (AAI) in Chicago, said that some of their constituents come “from countries where the political culture is violent [and/or] dysfunctional. Some have family stories that relatives have been dragged out in the night because they tried to engage” in the political realm.[vi] For AAI, there is a need to confront the ambivalence many of their constituents feel about politics and to adjust their tactics and expectations accordingly.

Other nonprofits capitalize on particular demographic characteristics of the constituents they serve. Voto Latino, a national voter engagement nonprofit based in Washington, D.C., targets the increasing numbers of young Latino citizens, many of whom were eligible to vote for the first time in 2012. Voto Latino relies heavily on Twitter to reach young voters. The organization tweets primarily in English, because younger Latino voters communicate mainly in that language, not Spanish.[vii]

Nonprofits that serve communities that trend older generally focus on more traditional electoral tactics. As Ali Najmi, co-founder of the South Asian-focused SEVA-NYC, explained, “Social media does not work well…[when] you have a whole generation of people who aren’t on Facebook or Twitter. All the young people are, but those in the voter pool aren’t young.” Najmi’s nonprofit instead focuses on “old school canvass[ing], door to door, ethnic media outreach, and creating events and a buzz on the ground.”[viii]

Voter Engagement and Advocacy Across the Nonprofit Sector

These four challenges and lessons are drawn from the electoral experiences of immigrant-serving nonprofits in 2012, but likely do not come as a surprise to nonprofit leaders serving other constituencies. Many of the same difficulties associated with adopting a new voter engagement program would be faced in adopting other new programs. The same prickly political climate for registering new voters might also be faced by those working on issues of reproductive rights, environmental protection, and declining state support for education. The imperative to do voter engagement, though, stretches across nonprofits in all sectors. While immigrant-serving nonprofits may face a particularly strong call to action because of the position of their constituents, other nonprofits—such as those serving women, teenagers, and the elderly—should also evaluate whether voter engagement, in particular, and advocacy, in general, fits within their nonpartisan mission.

Heath Brown, Ph.D., is assistant professor of political science at Seton Hall University, where he teaches courses in nonprofit advocacy, public policy, and research methods. He is the author of Lobbying the New President: Interests in Transition (Routledge, 2012).

Green, D. and A. Gerber (2008). Get Out the Vote: How to Increase Voter Turnout, 2nd Ed. Washington, DC: Brookings Institution Press.

[ii] Based on phone interview with Leticia de la Vara of One Arizona, July, 2012.

[iii] Based on phone interview with Navdeep Singh, July, 2012.

[v] Based on phone interview with Salah Mustafa, December, 2012.

[vi] Based on phone interview with Kathleen Fernicola, February, 2012.

[vii] Based on in-person interview with Maria Teresa Kumar, June, 2012.

How We Can Dismantle the Noxious Myths that Undermine Racial Justice