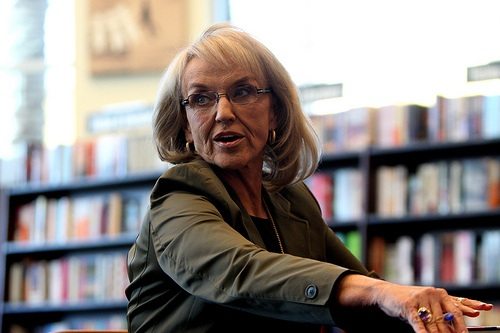 Go figure. Arizona Governor Jan Brewer is one of the nation’s most conservative Republican governors, famous for her support of draconian state-level immigration legislation and for her dust-up with the sitting President of the United States. So how do you make sense of her powerful advocacy on behalf of expanding Medicaid coverage for poor people in Arizona, a signature piece of President Obama’s national health insurance reform strategy?

She also showed herself as a very tough-minded governor. Her coalition in the Arizona House for the Medicaid expansion included Democrats and moderate Republicans in the state legislature. Because conservative Republicans organized against the expansion, including delays and stalls by the Speaker of the House, Brewer decided she had simply had enough obstructionism from the legislature and called them into session to vote.

Adding some muscle to her strategy, her allies on the floor of the House “largely refused to answer questions or discuss provisions in the proposed budget.” According to the Associated Press, because her allies refused to debate any of the issues on the floor, the dialogue between legislative supporters and opponents of the Medicaid expansion shifted to Twitter, where “lawmakers exchanged barbs and policy rebuttals.” Her coalition fought off 50 amendments to the Medicaid expansion and the state budget. Following the House’s approval of the expansion and the budget on Wednesday, an equally contentious state senate voted 18 to 11 in favor of the package on Thursday.

Why her tough-minded push for the legislation last week? Because she wanted it done before the new fiscal year started in July, and for that, they needed an approved state budget.

The leadership of the House and Senate issued what the AP calls “an angry statement rife with insults toward Brewer,” and on the floors of both chambers, Brewer was denounced as a tyrant and worse. The attacks seem to have rolled off her back.

Why is Brewer pursuing a bellwether element of the Affordable Care Act? She sees the additional federal money that the state will receive through the Medicaid expansion as helping to provide medical coverage to 300,000 poor Arizonans, and thus the product as a reduction of the uncompensated care costs that hospitals typically have to deal with. She says that to cover the uncompensated care, insurance companies charge higher premiums, which she describes as a “hidden health care tax.”

Arizona’s nonprofit hospitals and health clinics must be breathing a sigh of relief as they contemplate the governor’s choice to provide coverage for lower-income people up to 144 percent of the federal poverty level. They may be surprised that they are expressing gratitude to a governor seen as a diehard opponent of nearly anything associated with President Obama, but in this case, Governor Brewer seems to have looked at the numbers, recognized that the ACA is the law of the land, and dealt with the issue pragmatically—and forcefully.

Isn’t this an example of the muscular use of executive power that some people wish the occupant of the White House would display when he wants to get something done?—Rick Cohen