Steve Ballmer was frustrated. He was trying to understand how government spends taxpayer money—including his sizable tax payments—and what happens as a result of that spending. He discovered that while there is much information to be found, relatively little of it is analyzed or reported in meaningful ways. After three years of quiet effort, Ballmer and a team of researchers have produced new ways to analyze government information to benefit business and individuals. That effort has now been formalized and made available to the public.

On January 1, 2017, the USAFacts Institute was registered as a nonprofit corporation in the state of Washington. A search of GuideStar and the IRS website indicates that the organization has not yet received federal tax-exempt recognition, assuming it has applied for it. The institute’s partners include the University of Pennsylvania’s Wharton School of Business, the Stanford Institute for Policy Research, and Lynchburg College.

Ballmer’s personal commitment to USAFacts’ “non-partisan, [nonprofit] civic initiative” to deliver a “data-driven portrait of the American population, our government’s finances, and government’s impact on society” is expressed simply. He says, “Let’s say it costs three, four, five million a year,” he said. “I’m happy to fund the damn thing.” Ballmer doesn’t count his money spent on the institute as part of his family’s philanthropic giving. “I don’t even deduct this for my taxes. I pay this with after-tax money, no pretax money, because I don’t want anybody being able to think that factors in. But I feel like it’s a civic contribution more than anything else.” To date, start-up costs have totaled $10 million, paid for by direct funding and grants.

USAFacts has opened its website full of data compiled from more than 70 government sources. The institute decided to avoid use of nongovernmental data sources in an attempt to limit claims of ideological bias. It discusses government activity at the federal, state, and local levels, encompassing more than 90,000 distinct governments in the U.S., from federal and state governments to counties and “special district governments” like school districts. More than web-based data, it offers “an annual report, a summary report, and a [170-page] “10-K” modeled on the document public companies submit annually to the SEC for transparency and accountability to their investors.”

The 291-page annual report, presented in an online slide format, illustrates the breakdown of governmental activity using the Preamble to the U.S. Constitution as a guide: 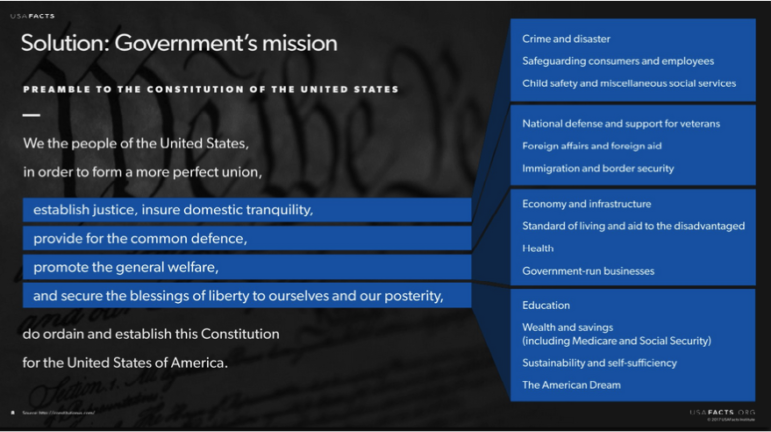 Fortunately for academic researchers, practitioners preparing grant applications, and other nonprofit sector professionals and volunteers, the detailed charts and tables are available in the report for discrete review and use. There is also a web-based search function to navigate the organization’s growing information troves. In the future, the institute hopes to open up access to its data, allowing companies and individuals to build on it.

Ballmer’s review of the data surprised him in many ways; one of them was in the extent of government funding in nonprofit activity. Speaking of the anti-poverty efforts he supports, Ballmer said, “Most of the [nonprofits] we work with would be 50 to 90 percent government funded,” I mean it’s funny, but I didn’t realize all these not-for-profits were in a sense almost like government contractors.” (We reserve comment.)

USAFacts is explicitly not a policy institution. It makes no recommendations based on the data it collects and organizes. From the Times article:

“I would like citizens to be able to use this to form intelligent opinions,” Mr. Ballmer said. “People can disagree about what to do—I’m not going to tell people what to do.” But, he said, people ought to base their opinions “on common data sets that are believable.”