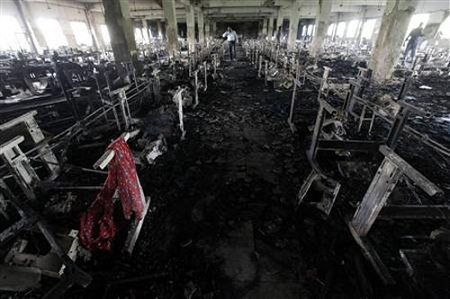 The horrible November fire in the Tazreen Fashions factory building in Bangladesh brought back the images of a similar incident in the United States: the Triangle Shirtwaist Factory fire in 1911. In that New York City fire, 146 garment workers died due to inadequate factory safety standards and, unthinkably, managers’ decisions to lock doorways to stairwells and exits so that workers on the upper floors could not escape. Although little manufacturing of this sort still goes on in the United States, it is a big part of the Bangladeshi economy. Bangladesh is the second largest exporter of apparel in the world because it has the lowest garment manufacturing wages. The young women at Tazreen, for example, were paid as little as $45 a month.

When the fire alarms went off at the Tazreen factory, managers blocked the exits, told the seamstresses it was only a test, and ordered the workers back to their machines. When smoke started filtering into the shop floor and workers could hear screams from below, the managers disappeared. The fire was coming up the stairwell, and iron grills blocked the windows. In addition to the lack of escape paths, the first must have spread quickly, as the company kept piles of yarn and fabric alongside electric generators—illegally. In the end, 112 people died in the Tazreen fire, and 53 were burned so badly that they could not be identified.

Workers at the Tazreen factory were making Faded Glory shorts for Walmart, True Desire lingerie for Sears, and commercial apparel featuring the U.S. Marine Corps logo. Tazreen was functioning for Sears and Walmart as a subcontractor, taking work through a middleman. Sears and Walmart (the company that U.S. officials have extolled during domestic disasters because its supply and distribution system is so state-of-the-art) state that they didn’t even know Tazreen was making clothing for them.

Tazreen had been cited for health and safety violations during an audit by the Business Social Compliance Initiative in December 2011, an audit done on behalf of Walmart, according to the New York Times. Established in 2003, BCSI monitors factories around the world for its member companies to ensure compliance with codes of conduct. Walmart says it conducted 9,737 audits of 8,713 factories in 2011, but the audits and findings are reportedly never published. Walmart’s official position on overseas factories is that it does business with those factories that are run legally and ethically and contracts with independent monitors to do more than 200 factory inspections each week.

What constitutes an independent monitor? Some years ago, we remember the Council on Foundations touting the Global Alliance for Workers and Communities, designed to monitor factories producing goods for Nike and the Gap—except that the Global Alliance was funded and largely governed by those two companies and therefore it was hardly independent. Where is the independent monitor that is watching the “subcontractors” in Bangladesh producing apparel for Walmart, Sears, and other companies? Where is the independent monitor for a factory like Tazreen, where recent practices resulted in the deaths of 112 workers?—Rick Cohen