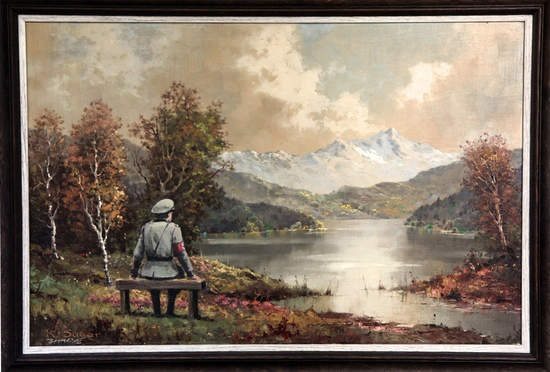 The piece pictured above was originally bought from a thrift shop run by Housing Works, albeit without the Nazi officer taking in the sights. Apparently the British artist Banksy, who has been doing a high profile cultural occupation/artist’s residency called “Better Out Than In” on the streets of New York City, inserted the officer and renamed the painting, “The Banality of the Banality of Evil,” a takeoff on the title of a book, Eichmann in Jerusalem: A Report on the Banality of Evil by political theorist Hannah Arendt.

In any case, a work by Banksy is a valuable asset, and so it is being auctioned off on Bidding For Good, with the last bid due in tonight at 8:00pm. The proceeds from the auction will go to homeless New Yorkers living with and affected by HIV/AIDS. Bids now stand at $310,200, and updates on the auction will be available at Housing Works’ Twitter, @Hwthrifts.

A Map of Banksy’s N.Y. work, complete with images, can be accessed here.—Ruth McCambridge