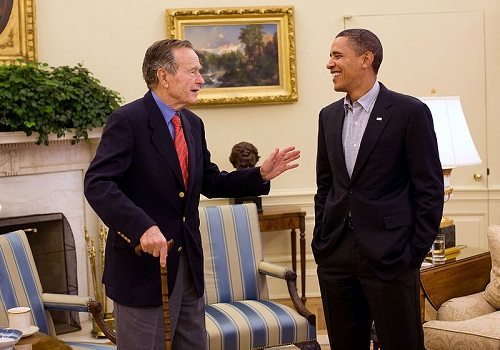 In the ambience of the White House’s event recognizing the 5,000th Points of Light award, the bipartisanship was impossible to miss. Following kind words toward President George W. Bush for his longstanding position in favor of comprehensive immigration reform, President Barack Obama lauded the 41st President of the United States, George H.W. Bush, for his role in creating the Points of Light program. Started 24 years ago, the daily Points of Light awards have continued through subsequent presidents, including Obama, to recognize the importance of volunteerism.

The recipients of award number 5000, Floyd Hammer and Kathy Hamilton, were recognized for creating a nonprofit called Outreach, described in most of the press coverage as a nonprofit created by two retired Iowans to deliver free meals to children in the U.S. and 14 other countries. On Outreach’s website, the program description is much more interesting. It appears that Outreach focuses part of its operations substantially in the Singida region of Tanzania, where 900 women have received microfinance loans to establish a basket-making cottage industry. Outreach purchases their baskets, which are then shipped to the U.S. and provided to U.S. nonprofits or churches for sale on consignment. Contributions to Outreach (contributors all receive a gift basket) and income from the basket sales above the initial purchase and distribution costs are used by Outreach to provide food, water, and medical care to needy children. The organization’s website also includes sales of other handcrafted pieces such as jewelry, woodcarvings, and clothing.

The Points of Light award materials and President Obama’s statements emphasized volunteerism, but Outreach is much more complicated than a simple volunteer program. In 2011, its total revenues reached $6.1 million, including $5.25 million in contributions and more than $800,000 in sales. Still a small nonprofit by the numbers, Outreach has grown significantly from total revenues of $877,000 in 2007.

Unlike many service nonprofits, Outreach’s Form 990s from 2005 through 2011 show no receipt of government funding. That may be implicitly what is being honored by the three presidents: a nonprofit service organization that doesn’t seek government funding. Points of Light was created by the now 89-year-old former president to honor volunteer service, but much of the work of the nonprofit service sector relies on more than volunteer labor and, unlike Outreach, has to turn to government for funding support to reach people in need.

That may be the arena for bipartisanship, as Barack Obama tries to find allies among Republicans. In light of the Tea Partiers stopping pieces of the Obama agenda in Congress, the two President Bushes look like reasonable, moderate GOP standard-bearers. For President Obama, honoring the first President Bush for his support of volunteerism and community service is about as uncontroversial an activity possible in the current political milieu. That’s fine, but let’s not get confused by the notion of completely donation-funded nonprofits as somehow preferable to nonprofits that seek and deploy government funding for their services to the poor.—Rick Cohen