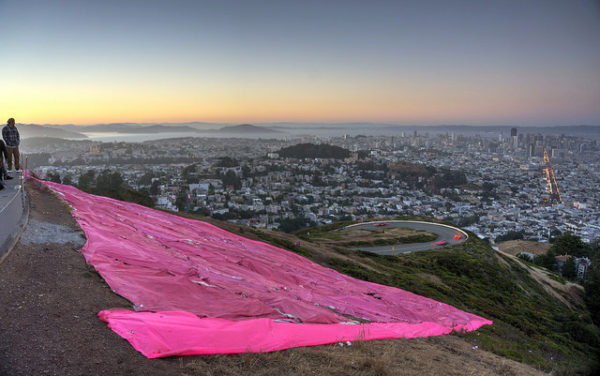 “Pink triangle over the city” by Peter ThoenyMarch 14, 2017; Royal Gazette

Island nation and world-class vacation destination Bermuda shares an important trait with America: No, not the latter’s high infant mortality rate, nor the side of the road Bermudans drive on. No, what we share with Bermuda besides hemisphere is that they too house a highly vocal minority opposing same-sex marriage.

Preserve Marriage, a Bermudan religious organization that openly argues for “traditional” marriage in a kinder and gentler manner, was granted charity status in the spring of 2016 and is weeks away from permanency and the expiration of its initial year under Bermuda’s statutory probationary period. This privilege was obtained despite its open politicking seeking legislative change and intervention in a key court case, which inspired vocal opposition to its successful application.

The Charity Commissioners, the government body with jurisdiction over charity matters, bought Preserve Marriage’s argument last year that it serves a “public benefit” as broadly defined in the Charities Act of 2014 (whose most prominent objective was to combat a burgeoning problem of international money laundering and the financing of terrorism). Preserve Marriage’s ideology is standard fare for what’s considered the religious right in the United States, with its tried and true testamentary tone:

We agree that marriage in Bermuda should remain defined and upheld as a special union ordained by God between a man and a woman. This union celebrates the necessary natural differences between a male and a female to procreate, fosters moral integrity, strengthens the family unit and therefore our society.

The government, with assumed humanitarian foundation and to preserve Bermuda’s bread-and-butter tourist trade, has not historically taken up the freshman charity’s views, as evidenced by the progressive statement of Premier Ewart Brown in 2011 when comedian and advocate Rosie O’Donnell cancelled her gay-friendly cruise’s stop in Bermuda fearing the promise of unsettling protests looming on the dock: “We stress to the international community the Bermudian Government’s position of inclusion and acceptance of all who wish to visit our beautiful and friendly country.”

News organizations for some time sought access unsuccessfully through freedom of information requests to unredacted letters of opposition to the charity application, submitted by over thirty individuals. The Charity Commission has now released these letters (there is no indication of any letters submitted in support of Preserve Marriage’s candidacy for charity status), and while often protesting Preserve Marriage’s “bullying” tactics, they show a citizenry’s passionate defense of marriage equality and basic human decency. “Please respect the government’s responsibility to support all of its citizens by refusing to recognises [sic] a group which advances prejudice. History will remember this decision,” one person wrote. Another individual paid a reminder to the Charity Commission of Bermuda’s place in the world order: “Bermuda was one of the last countries to decriminalize homosexuality. Let us not be further ridiculed by allowing a homophobic organisation to set up as a recognised charity in Bermuda!”

Someone suggested Preserve Marriage stick to collection plates: “They can pool some of their Sunday offering from each church to pay for their posters and flyers.” Another writer, embodying the island nation’s reputation for genteel civility, simply stated, “All is well? I object to Preserve Marriage gaining charitable status. May you enjoy the rest of your day.”

A legal case is pending brought by two male partners seeking Bermuda’s high court to declare the legitimacy of marriage equality under the Human Rights Law, which, like the United States Constitution, does not expressly declare the right of same-sex couples to receive marriage banns. Each house of Bermuda’s bicameral legislature has voted on Defense of Marriage Act (DOMA)-type amendments to the Human Rights Law, with the lower Assembly approving it, while the Senate voted it down by a razor-thin margin of 6-5.

Change is constant, and history does not flow solely in one direction. It remains uncertain whose views will prevail concerning the civil right of marriage equality.—Louis Altman