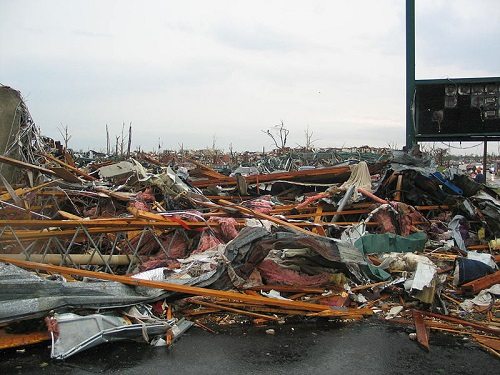 In Joplin, Missouri, there are two forces that are difficult to overcome. One is the E-5 force tornado that devastated the community a little over three years ago. The other is a powerful political donor—who doubles as a philanthropic donor—with concerns about how tornado-related donations might have been spent.

As many remember, Joplin was hit with devastating tornadoes two years ago, causing immense destruction throughout the community, including to schools. Half of the school district’s 20 school buildings were seriously damaged or destroyed, including the high school and one middle school. (The tempest hit Joplin on a Sunday, which meant that children thankfully weren’t in the schools at the time.) The expense of rebuilding the schools also came with additional costs—making some of the facilities usable as storm shelters capable of withstanding winds as high as 250 mph. Other expenses include the cost of programs to help students, parents, and teachers recover from the mental health impact of the devastating tornadoes.

The Joplin school district webpage has a half-dozen or so options for charitable giving for donors concerned about the schools’ recovery from the tornadoes of May 2011. To name four: the Operation Rising Eagle Fund to rebuild and replace destroyed schools and equip them with storm shelters, the Bright Futures Joplin Fund to provide teachers and children with basic educational materials and support, the Trees and Landscape Renewal Fund to support plantings to replace lost trees and “rebuild hope and community spirit,” and the Memorial Garden Fund at the Joplin High School.

Donations of all sizes have come in from around the world. The United Arab Emirates pledged $500,000, plus another $500,000 in matching funds, to support the school district’s computer learning initiative. PCS Phosphate Company, a local animal feed ingredients firm of significantly smaller size than the wealthy UAE, donated $35,000 to the Bright Futures fund. Some of the proceeds of a benefit concert in Branson, Missouri were dedicated to helping the Joplin School District’s band program. An Adopt-a-Classroom challenge grant of $250,000 from one Joplin family was quickly matched by another family.

Three years later, one charitable donor, David Humphreys, the CEO of Joplin-based TAMKO Building Products, launched a citizen’s petition campaign calling for an audit of donations to the schools. Humphreys and his wife Debra were the donors of the $250,000 grant plus $250,000 challenge grant to the school system. To their credit, TAMKO and Humphreys were donors to several tornado-relief efforts after May 2011, including the company’s $1,000,000 grant to the American Red Cross.

In the press, Humphreys has said that his interest in the audit is “to ensure taxpayers had a clear understanding of how public money is being spent.” He does not allege that he has any personal knowledge of misspending of tornado donations by the schools.

Although initially indicating that he would wait for the petitions, Missouri’s state auditor, Tom Schweich, changed his position to order the audit of tornado-related donations to the school system. The school system had announced that it was prepared to do an audit in any case, but asked Schweich to initiate it instead; had the school system conducted the audit on its own or in response to the citizen’s petition, it would have cost between $70,000 and $100,000. Schweich’s decision to order the audit moves that cost to the state government instead.

Humphreys is not only a charitable donor, but a political one as well. The News-Leader reports that Humphreys has donated more than $111,000 to Schweich’s political campaign in 2014—actually just last month—after donating $20,000 to Schweich in 2013. The Republican Schweich had no Democratic or Republican opposition to his campaign for state auditor, though he raked in hundreds of thousands in donations, and appears to be on his way to running for governor in 2016.

There appears to be another Humphreys-related petition drive aimed at auditing the city’s use of tornado donations, separate from the school district audit. While not alleging specific complaints, there are hints that something is amiss. “Questions have been raised by various constituencies about the finances of both the city of Joplin and the R-8 School District—not just the school district,” Humphreys told the Joplin Globe. “I think it’s time to put the rumor and innuendo to rest and let the light shine in on whatever the facts may be at both.”

While playing it cool, Humphreys seems to be bugged by something in the city’s and the school district’s handling of tornado funds. Unlike other potentially aggrieved donors, he has the political “ins” to get him responses most people might not be able to garner. We would love to find out the particulars. What concerns the residents of Joplin—or the donors to Joplin—about the use of tornado donations? Or is this an audit in search of a smoking gun, without even the evidence yet of smoke?—Rick Cohen