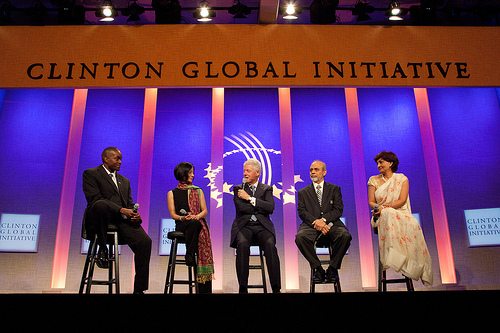 One thing that was obvious about the Clinton Global Initiative (CGI) annual confab in New York City last week is that former president Bill Clinton really knows how to pull in the financial commitments from corporate and philanthropic players. Whether you liked or disliked Clinton’s performance while in office, there’s no question that he has mastered the art of harnessing private-sector muscle—in the form of dollars, publicity, credibility—behind CGI priorities.

Part of it is Clinton’s ability to confidently weigh in on nearly any aspect of humanitarian or economic policy while showing that he understands where all the various interest groups on a given issue are coming from. Last week in the online publication UN Dispatch, blogger Penelope Chester noted, “Those who have been following President Clinton and have had a chance to hear him speak before know that he has an uncanny ability to speak authoritatively about essentially any subject under the sun.” For example, during a CGI roundtable with bloggers, Clinton expounded on a constellation of issues:

The former president’s remarks at the CGI bloggers’ roundtable will sound familiar to anyone who has seen first-hand a Bill Clinton performance during his tenure as POTUS. I was there to witness his stunning no-notes introductory remarks at the first and only White House Conference on Philanthropy in 1999, where he made donors and foundations squirm by calling for higher levels of charitable giving by the rich and, as a corollary, higher foundation payout rates. The kind of commentary he delivered at the CGI conference is representative of his remarkable genius: an ability to call on and integrate knowledge from different realms of intellectual thought and analysis. Whether or not you liked his policies as president or could forgive his personal failings, there’s no question about the quality of Bill Clinton’s mind.

Can Clinton’s masterful performance at the 2011 CGI tell us anything about nonprofits and philanthropy? Chester of UN Dispatch reported that this year’s CGI garnered 194 commitments valued at $6.5 billion. Is that all due to the fact that he used to occupy the Oval Office? That can’t be the whole story, because he left office dogged by scandals and misadventures. Is it because his wife Hillary happens to be the U.S. Secretary of State? (In response to a question about the 2012 and 2016 presidential elections, Clinton described her as “the ablest person in my generation.”) Maybe, but her senior role in the Obama Administration probably works both for and against her, with some potential donors eager to play up to a very powerful cabinet officer, while others perhaps steer clear of her due to their opposition to Obama policies at home or abroad.

Let’s go out on a limb and suggest some additional factors behind Bill Clinton’s brilliance in generating philanthropic commitments from all sorts of people and corporations (notwithstanding some real problems with expenditures, which we have documented here). These are attributes that all nonprofits would do well to emulate:

The post-White-House Bill Clinton is hardly perfect, even as a philanthropist. (Two examples: the reluctance of the Clinton Library Foundation to reveal major donors during Hillary’s presidential campaign and the criticism leveled at some of the Clinton Foundation’s work and partners in Haiti relief and reconstruction activities.) Regardless, with all his flaws, Clinton still has much to teach the sector about how to mobilize private capital for humanitarian and anti-poverty purposes.