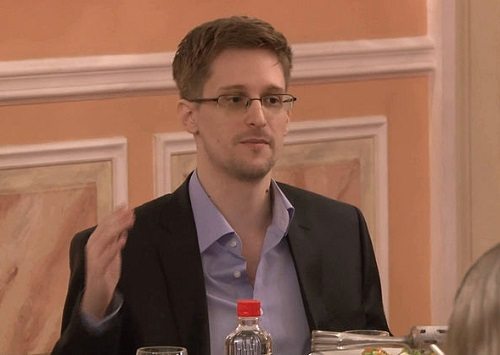 When Edward Snowden decamped for Hong Kong and then Moscow after sharing scads of information about the domestic—and international—mass surveillance activities of the National Security Agency, U.S. political leaders from the White House to Congress declared Snowden as someone to be charged with treason for leaking state secrets. Russia’s decision to let Snowden wander around Sheremetyevo Airport before giving him asylum led to increasing tensions between the Obama and Putin governments.

Defenders of Snowden from Washington officialdom were scarce, to put it mildly. Explanations that Snowden might be a whistleblower rather than a potential traitor didn’t get much traction among members of Congress or in the U.S. press.

Now, in the wake of revelations that the NSA’s surveillance included the monitoring of telephone calls in France, Spain, and Germany, including the personal phone of German chancellor Angela Merkel, Senator Patrick Leahy (D-VT) and Representative Jim Sensenbrenner (R-WI) have proposed legislation to rein in the NSA. Their co-authored op-ed in Politico doesn’t mention Snowden, but without Snowden’s revelations, their bill—the USA FREEDOM Act—might not have been generated and introduced.

They explain their bill simply:

“The USA FREEDOM Act ends the dragnet collection of telephone records…Our bill also ensures that this program will not simply be restarted under other legal authorities, and includes new oversight, auditing and public reporting requirements. No longer will the government be able to employ a carte-blanche approach to records collection or enact secret laws by covertly reinterpreting congressional intent. And to further promote privacy interests, our legislation establishes a special advocate to provide a counterweight to the surveillance interests in the FISA Court’s closed-door proceedings.”

Their bill, and even President Obama’s own statement last summer acknowledging the need for a review of NSA activities, elevates Snowden to the status of legitimate whistleblower. Had he not leaked his information to former Guardian columnist Glenn Greenwald, there would have been no Obama administration review of the NSA, no plan for hearings in the Bundestag about the NSA’s tapping Merkel’s personal phones, and no Leahy/Sensenbrenner legislation. Until Snowden’s actions, Congress favored blindly supporting and continuing the PATRIOT Act, with the Obama administration blithely elevating NSA surveillance activities to new levels.

Leahy and Sensenbrenner remark, “Congress did not enact FISA and the PATRIOT Act to give the government boundless surveillance powers that could sweep in the data of countless innocent Americans. If all of our phone records are relevant to counterterrorism investigations, what else could be? …The intelligence community has failed to justify its expansive use of these laws. It is simply not accurate to say that the bulk collection of phone records has prevented dozens of terrorist plots…The intelligence community now faces a trust deficit with the American public that compromises its ability to do its job. It is not enough to just make minor tweaks around the edges. It is time for real, substantive reform.”

In truth, the Leahy/Sensenbrenner bill has been in the works for a while, but wasn’t garnering much congressional support until the NSA revelations ticked off Latin American countries such as Brazil and turned off much of Western Europe. Even with a seething Angela Merkel, Leahy and Sensenbrenner face opposition from colleagues like Senator Diane Feinstein (D-CA), who has emerged as a staunch defender of continuing and even expanding NSA powers.

This past weekend, however, conservatives and liberals joined together to march in Washington to protest the NSA’s spying abuses. The members of the “Stop Watching Us” coalition that sponsored the march included an ideological variety of eclectic nonprofits, such the American Civil Liberties Union, the Electronic Frontier Foundation, Occupy Wall Street NYC, FreedomWorks, the Council on American-Islamic Relations, and the Libertarian Party. The head of the group Free Press, Craig Aaron, said at the march, “this isn’t about right and left—it’s about right and wrong.” Jesselyn Radack, a former Justice Department ethics advisor and the national security director of the Government Accountability Project, read a statement attributed to Snowden at the march.

“Our representatives in Congress tell us this is not surveillance,” she read. “They’re wrong.”

The Leahy/Sensenbrenner bill fundamentally underscores Snowden’s status, not as a spy or traitor, but as a whistleblower in service to the U.S. Constitution standing up against the uncontrolled spying of the National Security Agency.—Rick Cohen