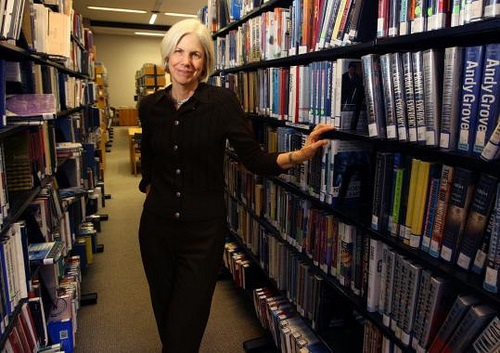 “I am choosing to step aside at this time to allow the work of the Boston Public Library to continue without distraction,” Ryan said in a statement. She goes on to thank the board of trustees for their support and expresses gratitude over having served in the position, but gives no specifics behind the decision to resign.

However, the statement came hours after a heated emergency meeting with the board of trustees and members of Walsh’s staff, including chief of staff Dan Koh, who strongly criticized the actions of Ryan and the library’s board in the wake of the missing artwork. The meeting also included an announcement of more work suspected missing from the library’s special collections: pages of sheet music from a manuscript.

“I had an email that somebody had left some music to the music department and several years ago, the music curator said, ‘We’re missing a few pages,’” Ryan told reporters at the meeting. “I’m looking into that with the music curator…. If it turns out to be an issue, then we’ll report it to police.”

Ryan declined to give any more information about the sheet music, whether it was misplaced or suspected stolen, or its estimated value, but she said it was nowhere near the magnitude of the over $600,000 loss of the other artwork.

The emergency meeting focused on the fact that while the Dürer print was reported missing a full year ago in June 2014, Ryan was not notified for nearly another year. (It was last seen in April 2014 after a group of children were visiting the library to view the print.) In his scrutiny, Koh charged Ryan and the trustees for not treating the situation as seriously as was necessary, given the severity of the issue.

“We are gravely concerned about how over $630,000 worth of artwork could be allowed to go missing, but more importantly, how it was allowed to go missing for nearly a year without anyone noticing,” said Koh during the meeting. “We also have significant concerns and fears that more may be missing—it has been revealed to us, for example, that an inventory of just the prints alone has just begun only a few days ago, not to mention more that needs to be done with the collection at large.”

Perhaps even more poignant given Ryan’s resignation, Koh also noted his concerns about the “lack of independence” between Ryan and the board chair, Jeffrey Rudman:

“We believe that the board needs to serve as the true independent check of the president and its staff. We believe that it is the fiduciary duty of the board chair and the board to play this role. However, in recent weeks, we feel that this hasn’t been the case…

“As an example, both the mayor and I felt it very important that I address the board today without the president in the room about this sentiment. However, we faced significant pushback from the board chair on this point, because the president was uncomfortable with not being in the room while I spoke.”

Koh called for the board members to conduct the investigation by putting aside their “personal feelings” for the staff as well as President Ryan, which prompted some resistance from Rudman.

“The board is the check and the fact that I personally admire President Ryan—and I do—doesn’t change my resolve to find out what happened and to try to address it constructively, OK?” said Rudman.

Given Ryan’s resignation, it’s unclear how the investigation will continue to unfold with the potential new leadership, or what role the board of trustees will have in that transition.—Shafaq Hasan