In Boston’s Mattapan neighborhood, the ballot question that would have lifted the cap on the number of charter schools permitted was firmly defeated, 64 percent to 34 percent. In doing so, the largely black Caribbean neighborhood followed the same path as the other minority neighborhoods in Boston. This is important because proponents of the measure based their arguments on the needs of students of color. 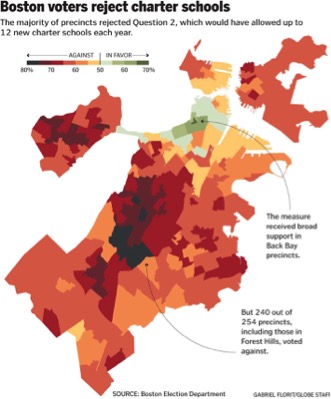 According to a Boston Globe analysis of election results, the organizers of the ballot campaign to expand charter schools, who spoke passionately about the need to provide better educational options for students of color, failed to deliver victories in minority precincts throughout Boston, even in those neighborhoods with the lowest-achieving schools in the state. Of 255 precincts in the city, only 14 voted to lift the cap and they were located for the most part in primarily white areas. This after this

This is true even despite the fact that Massachusetts’s charters typically outperform traditional public schools on standardized tests. Moreover, two dozen charter school campuses are sited in low-income neighborhoods with large populations of newcomers and people of color.

The Globe writes, “Civil rights advocates say families of color yearn for something deeper: A robust commitment and plan to improve the quality of education in the city’s school system so they don’t need alternatives…And they want to work in partnership with policymakers rather than having outsiders coming in and proposing a solution.”

Michael Curry of the NAACP says, “Communities of color spoke loudly about our needs to protect public school funding while expressing an urgency to deliver a quality education for all.” As readers of the nonprofit newswire may remember, the NAACP took a stand for a moratorium on charter schools earlier this year, as did Black Lives Matter.

“I believe the electorate showed in the communities of color that it’s in our character to uplift and focus on the education of all students, not just some,” he said.—Ruth McCambridge