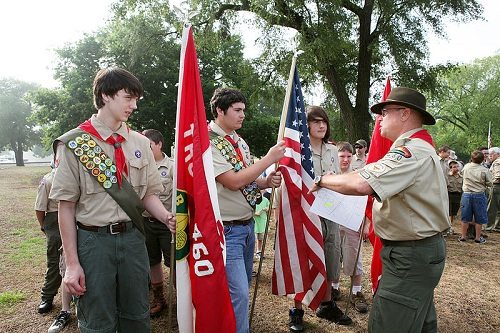 After the vote allowing openly gay young people to become scouts, many are trying to determine what the fallout will be. This may not show up conclusively for some time. Many are watching, in particular, the decisions being made by the religious institutions that sponsor approximately 70% of all Boy Scout troops. The response seems to vary wildly.

In Overland Park, Kansas, Jonas Hayes, pastor at Grace Covenant Presbyterian Church, said he and his congregation are currently deciding the future of their role as a sponsor for a troop. In this case, the church leaders are happy to see openly gay scouts included, but they do not feel the age cutoff makes sense. “I see a disconnect between the concept that it’s OK to be a gay or lesbian youth, but when you turn 18…you’re denied leadership responsibilities.”

But in Indiana, the Grace Assembly of God Church in Whiteland has decided that it will no longer support Cub Scout Pack 617. “As a ‘faith-based’ organization and a Pack that leads from a Christian platform, we cannot support this decision,” reads a statement on the church’s website. Assemblies of God churches sponsor nearly 2,300 Scouts nationwide, and Superintendent Dr. George Wood has announced they will sever ties with the BSA.

The Southern Baptist Convention will make a decision about their participation with BSA this week and many expect them to cut ties as well, affecting up to 100,000 boys, but the Association of Baptists for Scouting has recommended that Baptist churches to continue their involvement with Boy Scout troops.

Many expect the exodus to continue through the end of the year. What are you seeing in your community? Help us track this. —Ruth McCambridge