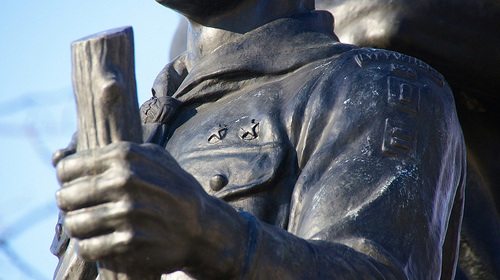 In a historic vote yesterday afternoon, the Boy Scouts of America elected to allow openly gay youth to be scouts, starting on January 1, 2014. The proposal passed with a 60% majority. Because there was a portion of the base (and of sponsoring institutions) that were advocating against the measure, the fallout in terms of defections may be severe, but that would have been true whichever way the vote went. We would expect the issue of the exclusion of gay adults as scout leaders to be taken up quite soon.

But in a story yesterday morning in the Christian Science Monitor, the Executive Committee of BSA is quoted as having sent a memo to the news source, stating that it does not foresee addressing the issue of gay leaders for the near future. “The executive committee unanimously believes this is the best resolution,” the email says, continuing, “it is the option that did not, in some way, prevent kids who sincerely want to be a part of Scouting from experiencing this life-changing program, and to remain true to the long-standing virtues of Scouting.”

The Boy Scouts have had what the Times calls a de facto “don’t ask, don’t tell” policy in place, allowing all youths and adults to participate in scouting as long as they do not openly state their orientation. Over the past year, this policy has come under increasing criticism, to the point where an online petition was launched, calling on the Boy Scouts to lift the ban. Millions signed it. In response, the executives of the Boy Scouts conducted a broad survey of their members, and devised the compromise policy that went in front of volunteer leaders for a vote. More than 1,400 volunteer leaders from 270 Boy Scouts councils gathered for the vote, and people from both sides of the argument made their voices heard.

The general opinion yesterday morning was that the vote would be close even though the Mormon Church, the largest sponsor of scouting units, indicated support for the limited change, and the Catholic Church recently said they would not pull their involvement so long as the policy did not include gay leaders.