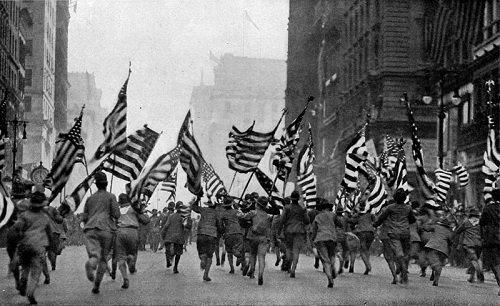 Many observers figured that the Boy Scouts would try to take a compromise position in its final decision about whether to continue its ban on gays in its ranks, but this proposal came as something of a surprise. On Friday, the Boy Scouts of America proposed a policy that would allow openly gay scouts but gay adults would continue to be banned as leaders. (Have they met the gay rights movement?) The decision awaits ratification by 1,400 voting members of the Scouts’ National Council during the week of May 20.

As might have been anticipated, the proposal was not a big favorite with either side of the debate “as conservative Christians said the Boy Scouts had caved in to political pressure, and gay rights groups said they were perpetuating discrimination and dangerous stereotypes about gay men.”

Many scout troops are sponsored by religious organizations; approximately 25% of them are sponsored either by the Mormon Church or the Roman Catholic Church.

Surveys on the issue reportedly conducted by the Boy Scouts have found clear generational differences in attitudes. A majority of adults associated with the Scouts thought the policy of excluding gays should continue, but the ban was opposed by parents under the age of 50 and a majority of teenagers.

The Boy Scouts of America is likely not going to be able to please anyone with this proposal, and now seems to be asking that people believe that it will be enough to make this age-limited response, because sexuality really is none of their business. The proposed resolution says that “scouting is a youth program, and any sexual conduct, whether homosexual or heterosexual, by youth of scouting age is contrary to the virtues of scouting.” It goes on to say, “The Boy Scouts of America does not have an agenda on the matter of sexual orientation, and resolving this complex issue is not the role of the organization, nor may any member use scouting to promote or advance any social or political position or agenda.”

How do you respond, readers?—Ruth McCambridge