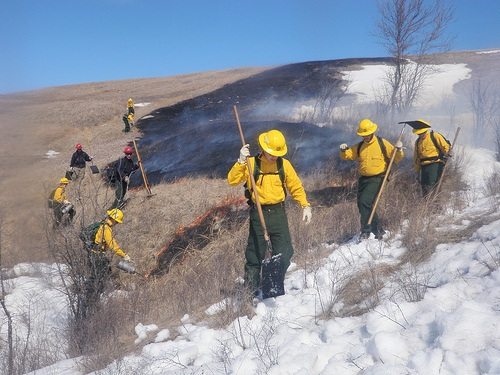 John Bridgeland was George Bush’s director of the Domestic Policy Council and the originator of FreedomCorps, which was meant to encourage volunteers in homeland security activities. Alan Khazei was the founder of City Year and, recently, the unsuccessful Democratic primary challenger to Elizabeth Warren for the Massachusetts senate seat. Together, they have joined forces to promote the idea of an expected, though not mandatory, “period of full-time national service as a rite of passage for every young American, ages 18 to 28.” In their vision, “[y]oung adults could choose the Army or Peace Corps, Marine Corps or AmeriCorps, the Navy or VISTA.”

If it weren’t mandatory, how would this expected national service be institutionalized? Bridgeland and Khazei have a number of ideas, ranging from cultural behavior to federal policy. For example, they suggest that all college admissions officers and all corporate employers should ask applicants “where did you serve,” though one wonders if the answer “where” rather than “whether” might lead to different recruitment decisions. On policy, Bridgeland and Khazei recommend that “[t]he president…challenge every federal department and agency to use national service members to meet their missions, as the new FEMA Corps, School Turnaround AmeriCorps and STEM AmeriCorps programs are doing today,” though one might ask how the increased use of unpaid or stipended volunteers in federal agencies would go down with the unions representing full-time government employees, who see their jobs as sources of both public service and family sustenance. They also recommend the creation of a “Veterans Corps,” based on the ability of veterans “to use GI Bill benefits to support up to a year of service.”

As recommendations to “democratize” national service, they make two suggestions: “Every college and nonprofit should sign up and unlock more resources from the private sector to support positions. And Kickstarter could allow any American to support a young person who wants to give a year to our country.” They aren’t specific regarding the meaning of “democratizing” service, but one possible interpretation might be that the socioeconomic profiles of participants in AmeriCorps, for example, and in some service entities such as Teach for America, tend to be a notch higher than most Americans. The AmeriCorps stipends they receive are generally below living wage, hovering around minimum wage or less on a full-time basis. Young people from relatively affluent families can live on an optional year or two of AmeriCorps-level stipends, but others might find that extraordinarily difficult or impossible.

Khazei and Bridgeland have joined not only to co-author a Politico op-ed, but to co-chair the Franklin Project at the Aspen Institute, with the mission “to marshal the best case for a voluntary civilian counterpart to military service in the United States.” Although we haven’t yet seen it, the Franklin Project promised a Franklin Project Action Plan of specific policy proposals to be released at a summit that just happened this week.

The two authors are clearly apostles of national service. Bridgeland, for example, has even written about national service as a means to help deal with the nation’s unemployment problem, suggesting that a doubling of national service would “put a half million unemployed youth into productive work immediately.” The notion of fighting unemployment with service jobs at minimum wage or lower struck some people as a less than robust response. They and national service will both be better served if they temper their enthusiastic advocacy and the Action Plan’s policy recommendations with a strong dose of pragmatism about what will work not only for young people participating in national service, but for the nonprofits that often provide national service opportunities.—Rick Cohen