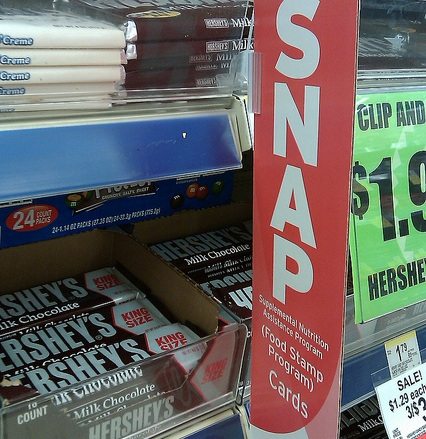 In Minnesota, a fight is brewing regarding the right of food stamp recipients to buy items with high sugar content. In 2004, Minnesota tried to prevent food stamp purchases of soda and candy but the feds denied the plan and last year New York was denied in its attempt to ban the use of the stamps to buy sugary drinks. Still, some advocates continue to push for restrictions while others oppose them.

Mary Story is a senior associate dean of academic and student affairs for the University of Minnesota’s School of Public Health and she says that the coexistence of food insecurity and obesity as serious problems for low income people requires a “moderniz[ation]” of the food stamp program. She hopes to help convince the USDA to allow states to test out banning the sugary drinks as a start.

Simone French, director of the University of Minnesota’s Obesity Prevention Center, opposes the use of food stamps on all high-calorie, low-nutrition foods: “Like candy and cookies, Ho-Hos and processed snack foods, Doritos. Those we don’t really need,” French said. “They don’t really provide much nutrition, and they provide a lot of calories and fat.”

Minnesota Grocers Association President Jamie Pfuhl worries that the job of monitoring the healthfulness of products would discourage vendors. “There are about 20,000 products being introduced annually, and so we would have to determine with each one where they fall in that category,” Pfuhl said. “Some of our small grocers may not be able to keep up with that and may actually lose the ability to participate, which would be incredibly detrimental to Minnesotans.”

NPQ published a newswire a few days ago about the melee surrounding a Swedish charity’s tradition of distributing cigarettes to homeless people during the holidays. Some health advocates feel that it is wrong-headed but the charity distributing the cigs is holding firm to its work. In this similar situation, NPQ would be interested in reader responses to this disagreement among food-related advocates. –Ruth McCambridge