While we do not know what effect the CBO scoring of the Senate GOP health care bill will have on its immediate prospects, the New York Times reports some some divisions in the ranks:

Two Republicans, Senators Susan Collins of Maine and Rand Paul of Kentucky, said Monday that they would vote against even debating the health care bill, joining Senator Dean Heller of Nevada, who made the same pledge on Friday. Senator Ron Johnson of Wisconsin hinted that he, too, would probably oppose taking up the bill on a procedural vote expected as early as Tuesday, meaning a collapse could be imminent.

The nonpartisan Congressional Budget Office (CBO) released its analysis, or “scoring,” of the budgetary impact of the Senate GOP version of the American Health Care Act (AHCA), the House-passed bill seeking to “repeal and replace” the Affordable Care Act, or Obamacare.

The Senate GOP’s “Better Choice Reconciliation Act of 2017” (BCRA) will leave 22 million more people uninsured in 2028 than the 28 million uninsured that would be the case if the legislation were not passed and the status quo were to continue for the next ten years. The bill will reduce federal spending by more than $1 trillion and reduce revenues by $701 billion over the next ten years, resulting in a net savings to the federal government of $321 billion. This is significantly more than the $119 billion net that would be saved in the House-passed AHCA.

The savings come largely as a result of the Senate GOP’s more aggressive reductions in federal funding for Medicaid. Both the AHCA and the BCRA end Obamacare’s 90 percent federal support for Medicaid expansion, ultimately treating reimbursement for all Medicaid participants equally. In addition, it would shift significant Medicaid funding responsibility to states by changing federal support from a share of total enrollee expenses incurred to providing a fixed amount per recipient to states to administer. Under the Senate GOP bill, Medicaid spending would increase at the rate of general inflation rather than the rate of medical inflation as envisioned in the House bill.

Mere cumulative numbers aside, other information in the report may indicate to the GOP that pursuing the current bill could have significant downsides, no matter how much they wish to take action. Again, from the New York Times:

Moreover, the report said, premiums for older people would be much higher under the Senate bill than under current law. As an example, it said, for a typical 64-year-old with an annual income of $26,500, the net premium in 2026 for a midlevel silver plan, after subsidies, would average $6,500, compared with $1,700 under the Affordable Care Act. And the insurance would cover less of the consumer’s medical costs.

However, we feel it necessary to note that the CBO estimates for the BCRA have the same assumptions and the same limitations that its estimates for the AHCA contained. As we observed, CBO addresses “uncertainty surrounding the estimates” this way:

The ways in which federal agencies, states, insurers, employers, individuals, doctors, hospitals, and other affected parties would respond to the changes made by the legislation are all difficult to predict, so the estimates in this report are uncertain. But CBO and [the Joint Committee on Taxation] have endeavored to develop estimates that are in the middle of the distribution of potential outcomes.

One key problem with the CBO estimates for healthcare finance legislation is that CBO has consistently overestimated the number of people who would be insured under the ACA’s insurance exchanges. Avik Roy has written on this for the Wall Street Journal and Forbes. In an article on the Foundation for Research on Equal Opportunity website, Roy includes the following chart which tracks CBO estimates for past and future insurance exchange enrollment: 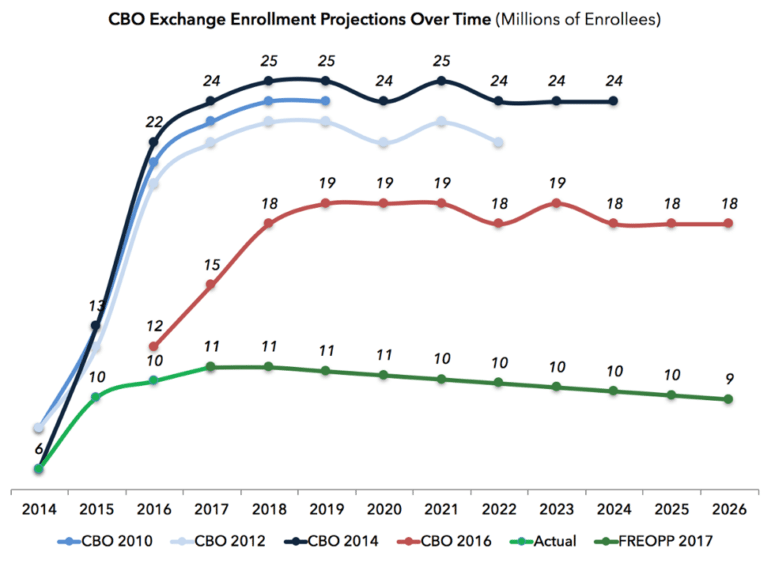 The point here isn’t to bash the CBO. Like any researcher, the CBO report’s authors are constrained by the assumptions they make, and events over which they have no control can wreak havoc with those assumptions and, consequently, the reliability of the predictions made using those assumptions. As NPQ has reported, opponents of the AHCA don’t like the BCRA already, and the CBO scoring will provide additional ammunition in the legislative battle. Our point is that for the CBO report, like any research paper, it is crucial to understand the report’s assumptions as well as its identified limitations when considering the results headline.

There’s no sure sign that this this legislation is in shape to be passed even by the majority party that spawned it. Some like Senator John Thune of South Dakota, a member of the Republican leadership, say that delaying could be justified if a better policy would come out of it, but that such an outcome was unlikely.

“This is the best we can do to try and satisfy all the different perspectives in our conference,” Mr. Thune said. “It’s time to fish or cut bait.”—Michael Wyland