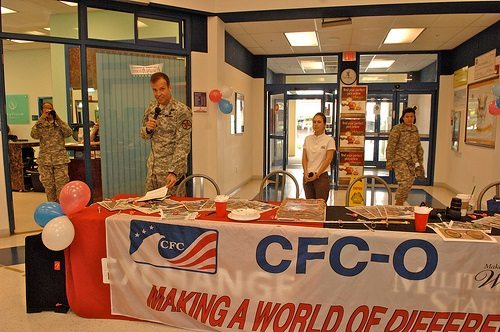 Fundraisers like to keep things positive so that donors believe that they are buying into something very desirable indeed, and so I got taken to task when I wrote that nonprofits might eventually suffer from the effects of a Combined Federal Campaign that had been delayed, at least in part by the federal government shutdown.

But last Thursday, the Office of Personnel Management released a memo from Acting Director Elaine Kaplan announcing that the end point for the 2013 campaign would be pushed out from Dec. 15, 2013, to Jan. 15, 2014, giving the campaign an extra month to try to reach its goal.

The Department of Defense had suspended the domestic CFC campaign for the period of the shutdown. Tony DeCristofaro, director of the DoD’s Voluntary Campaign Management Office, says he doesn’t foresee a long-term effect. Apparently, DoD employees have, as of November 25th, pledged “more than” $725,000 against a $12.5 million goal.

The DoD generally makes up the lion’s share of donations to the CFC, and more than 35 percent of DoD employees participated in the 2012 campaign, where the participation for all federal employees in 2012 was cited as being 21 percent. This was my reason for thinking that the delay might be problematic for the campaign, not because I am an alarmist wet blanket.—Ruth McCambridge