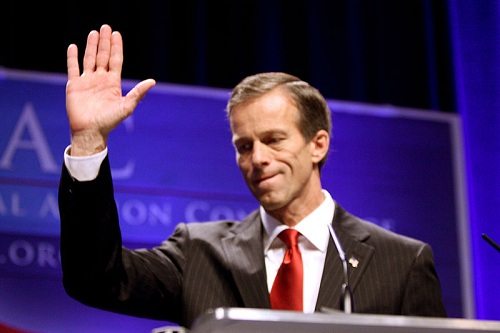 Sen. John Thune (R-S.D.) and Sen. Roy Blunt (R-Mo.) just submitted an amendment to the Senate Democratic budget that they say would “protect charitable organizations from being used as a source of revenue to pay for more spending by protecting the deduction for charitable giving from being capped, limited, or eliminated to pay for new spending as part of any tax increase.” Both went to the Senate floor to speak on the subject of charitable deductions, with Blunt intoning, “our religious institutions, our charities, our hospitals, our museums and others come together to take private resources and meet a number of community needs that are met in the best possible way by people who are doing that through a charitable effort…feeding the hungry, caring for the sick, serving the poor, educational institutions of all kinds undertaking critical research, money that goes to either help operate or actually support museums and parks.”

Thune and Blunt seek to amend the FY 2014 budget that emerged from the Senate Budget Committee chaired by Sen. Patty Murray (D-Wash.). Murray’s budget called for raising $975 billion in new revenues over 10 years by eliminating loopholes, but never said which loopholes it would plug. Aside from its statement of purport, the Thune/Blunt amendment doesn’t actually do anything about loopholes or, for that matter, charitable deductions. Here is the actual text of legislative portion of the amendment—all of it:

On page 49, strike line 20 and all that follows

through page 50, line 2, and insert the following:

The levels in this resolution are amended by reducing

total revenues by the following amounts:

It appears to us that charities are being played—exactly as they say they don’t want to be. At the “Foundations on the Hill” Alliance for Charitable Reform Summit cosponsored by the Council on Foundations and the Forum of Regional Associations of Grantmakers earlier this week, speakers applauded themselves for how they laser-focused their attention on opposing changes to the charitable deduction and steered clear of pressures from both Democrats and Republicans on revenue issues that would have thrust charities into a political maelstrom. If charities reflexively laud the Thune/Blunt amendment, they will have fallen into a bit of a trap of endorsing a bill that seems to be a Republican stratagem for halving the Senate Democrats’ plan for new revenues via loophole-closing without any clear relevance to the charitable deduction.

This amendment is a wolf in charity’s clothing. Nonprofits would be well advised to watch out for its sharp teeth. —Rick Cohen