Will Fisher of the Center on Budget and Policy Priorities writes that the federal government spends more on the 5 million households with incomes of $200,000 or higher than on the more than 20 million households with incomes below $20,000. The numbers of households with worst-case housing needs has grown enormously since 2007, as this August 2013 report from HUD to Congress details. The housing analyst thinks that we need to replace the mortgage interest deduction with a less expensive, better targeted credit and create a renters’ tax credit to rebalance the housing subsidies to benefit those who are actually in need of them. This paper from CBPP explains how Congress could use savings from reforming homeownership or non-housing tax subsidies to fund the renters’ credit. 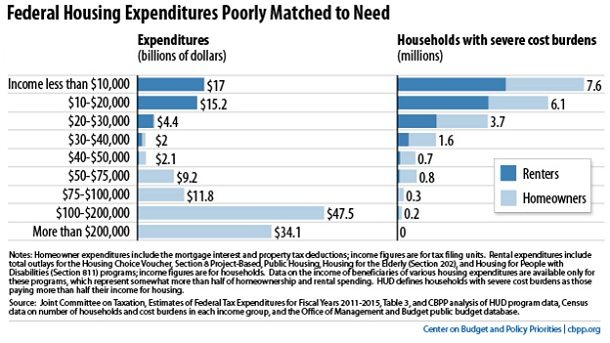