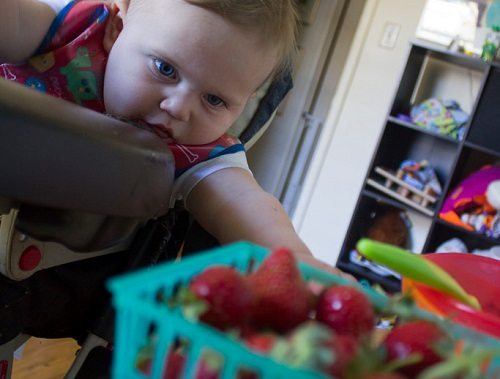 According to a recent article by the Washington Post, researchers from the University at Buffalo “found considerable differences in the solid foods babies from different socioeconomic classes were being fed.” The study found that diets “high in sugar and fat were found to be associated with less educated mothers and poorer households.” On the opposite side, the study found that babies that followed recommended diets were linked to higher education and higher incomes.

In looking at the foods eaten by infants in different socioeconomic views, babies in lower income brackets were often fed “candy, ice cream, soda, and french fries.” The study looked at over 1500 babies and divided eighteen different food types into four categories, ranging from “formula” and “infant guideline solids” to “high/regular cereal” and “high/sugar/fat/protein.”

The short-term health challenges resulting from a poor infant diet, which is higher in levels of fat, sugar, and dairy, can be weight gain and stunted growth. Researchers believe the data suggests that the lack of eating right resulted in improper bone growth. As expressed in the article, “lower education levels are likely tied to poorer awareness of proper nutrition and infant feeding practices. If parents don’t have a proper understanding of what infants should be eating, and how important proper nutrition is for a child’s short- and long-term health, it’s hard to expect them to choose healthier foods when less healthy ones might be more convenient.” These health challenges and eating habits have a number of long-term effects, and new data suggests it could have a severe effect on education and future wealth.

In a tangent related to the nation’s growing income inequality, food inequality has also grown significantly. According to the article, “food inequality, whereby America’s wealthiest people eat well, while the country’s poorest eat, well, poorly, is not only real, but worsening.” In a ten-year diet study, the Journal of the American Medical Association Internal Medicine found that “socioeconomic status was associated strongly with dietary quality, and the gaps in dietary quality between higher and lower SES [socioeconomic status] widened over time.”

According to the study’s lead author, Xiaozhong Wen, time as an infant is supremely important: “Infancy is a critical period to learn various food tastes. Parents should take advantage of this period (when they have high control of what their infant can eat) to develop a life-long preference for healthier foods.”—John Brothers