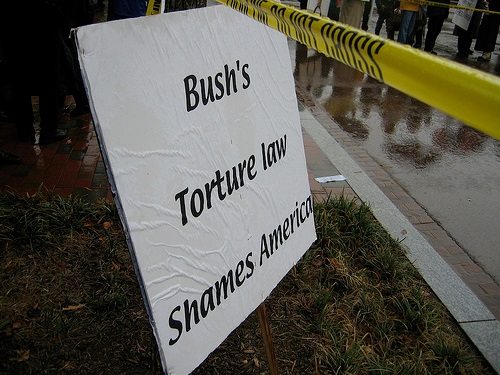 If you haven’t taken notice of the Senate Select Intelligence Committee’s report on the CIA’s detention and interrogation techniques—the report now being called “the CIA torture report”—you might at least want to look at the 20 major findings and conclusions, even if you aren’t likely to thumb through the 525-page version of the report, which the committee has distributed as a more readable version of the full 6,700-page document. It is a milestone public document, at once a terrible indictment of the CIA and the fabricated stories that top officials of the U.S. government offered even in congressional testimony, and, in an odd way, a commitment to American values that were unfortunately trampled by politicians of both parties during the war in Iraq. At a minimum, the nation owes its gratitude to California senator Dianne Feinstein, who withstood tons of pressure from the CIA and other sources but stayed the course, saw this project through to the end, and got the report released, even with loads of redactions, to the public.

Nonprofit Quarterly always looks for lessons and meaning for the nonprofit sector from seminal events in other sectors, as nonprofits are never immune from such major issues as U.S. foreign policy or the conduct of the wars in Iraq and Afghanistan, but more precisely, there are usually nonprofit lessons and nonprofit implications from events that seem distant from the day-to-day work of domestic nonprofits in urban and rural communities. Here are a few thoughts that strike us as relevant:

First, remember the importance of values. Feinstein was under pressure not to release the report, not just from Republican defenders of Dick Cheney, but even from Secretary of State John Kerry, who warned that releasing the report could result in new unrest in the Middle East. Her statement in the foreword to the report is a powerful affirmation of values of transparency and democracy, values that were sacrificed in the conduct of the Iraq war and specifically in the CIA’s practices:

“The major lesson of this report is that regardless of the pressures and the need to act, the Intelligence Committee’s actions must always reflect who we are as a nation, and adhere to our laws and standards. It is precisely at these times of national crisis that our government must be guided by the lessons of history and subject decisions to internal and external review.”

That cogent analysis might be a useful guideline for nonprofits and foundations that, as is all too typical nowadays, in the interest of managing bad news try to circumvent or suppress public disclosure and debate about their practices, even to the point of compelling staff to sign all-encompassing non-disclosure commitments that basically shut people up.

The second lesson of the CIA torture report is that our society should give no quarter to entities that lie to government and, as a consequence, lie to the public. The report’s 20 major findings and conclusions are unsparing, including these about the CIA’s multiple years of consistent lies:

#3: “The interrogations of CIA detainees were brutal and far worse than the CIA represented to policymakers and others”

#4: “The conditions of confinement for CIA detainees were harsher than the CIA had represented to policymakers and others”

#5: “The CIA repeatedly provided inaccurate information to the Department of Justice, impeding a proper legal analysis of the CIA’s Detention and Interrogation Program.”

#6: “The CIA has actively avoided or impeded congressional oversight of the program.”

The lessons are clear for the CIA and for all of us. Efforts to distort or suppress information fail in time, but in the process, they weaken the structure and credibility of democratic government. The same applies to all institutions in society. There should be no room for lying to the public or, in the case of nonprofits, to stakeholders, else the architecture of civil society is damaged.

Third, the report contains striking information about how CIA brass even fought efforts of the agency’s own Inspector General. The report said that the CIA “avoided, resisted, and otherwise impeded” the efforts of the IG to monitor the detention and interrogation program. In other words, the CIA fought against internal and external “watchdogs” in its opposition to any kind of oversight. The importance of the watchdog function in democratic countries cannot be understated. The implication for nonprofits is not only in what they should be doing to keep a close eye on the behavior and misbehavior of governmental agencies; they should be open to the need for oversight of their own operations. The institutions of the public and private sector that somehow assert that they are somehow above and immune from the need for critical scrutiny are often those that need it the most.

Fourth, it isn’t the Feinstein committee report that will cause unrest in the Middle East. That job has already been done by the CIA and Dick Cheney, whose “enhanced interrogation” practices have helped create a new generation of extremists in the Middle East, the terrorists who have succeeded Osama Bin Laden’s Al Qaeda legions, willing to target not just Westerners, but the representatives of humanitarian NGOs who have now been made vulnerable by American policies and practices that are in many cases truly barbaric (for example, the CIA’s practice of “mock executions,” a horrific practice that many of us remember having been implemented by the Iranian students who captured, held, and terrorized the 52 U.S. embassy personnel for 444 days between November 1979 and January 1981). Humanitarian aid workers from the West are increasingly targeted by terrorists as fair game in this race to the bottom of torture and depredation. Last month, a South African aid worker working for a U.S.-based NGO called Partnership in Academics & Development and his two sons were killed by Taliban suicide attackers in Kabul. Earlier in November, ISIL terrorists beheaded American Peter Kassig, who had been working in Syria with an NGO he founded, Special Emergency Response and Assistance, to provide medical aid to Syrian refugees. It isn’t the Feinstein report that will make people vulnerable; it is the torture practices of the CIA that have helped the likes of Al Qaeda and ISIL recruit willing disciples.

The Senate committee report guided by Senator Feinstein reveals that parts of the U.S. government behaved abominably over a period of many years, with consequences that will reverberate in American society for a long time to come. As nonprofits, no matter what our programs and interests, we are not immune from the practices of our government. The nonprofit sector above all others has to stand for values of democracy, transparency, and decency and commit to rooting out public violations of American democracy.—Rick Cohen