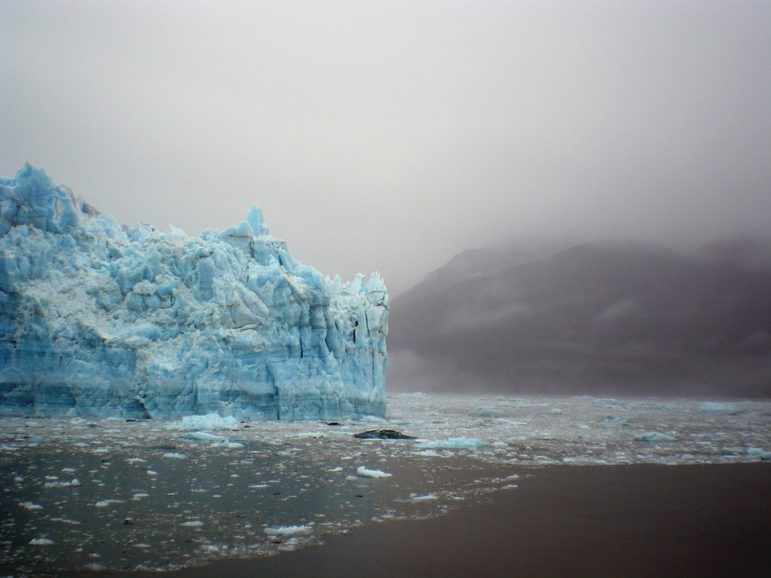 Global warming is changing Alaska, and the state’s indigenous peoples are hit the hardest. Melting polar ice, the retreat of glaciers, rising sea levels and the consequent flooding of coastal communities, increasing storm intensity, crop failures, damaged infrastructure, and endangered plant and animal species are among the threats to a way of life that has endured for thousands of years. The New York Times reports even more alarming news:

A spate of extreme warmth in the Arctic over the past two months has startled scientists, who warn that the high temperatures may lead to record-low ice coverage next summer and even more warming in a region that is already among the hardest hit by climate change.

The Guardian takes an especially close look at how climate change is causing the loss of the subsistence way of life in Alaska. Animal habitats and migration patterns are shifting. As sea and river ice change, hunting and fishing become more dangerous. Food insecurity is an urgent and growing problem; in these remote areas, a gallon of milk costs $15 due to the costs of transportation.

The Guardian describes an island community that caught just 36 walruses compared to 600 only a few years ago.

The extreme warmth of 2016 has changed so much for the people of the Arctic that even their language is becoming unmoored from the conditions in which they now live.

The Yupik, an indigenous people of western Alaska, have dozens of words for the vagaries of sea ice, which is not surprising given the crucial role it plays in subsistence hunting and transportation. But researchers have noted that some of these words, such as “tagneghneq” (thick, dark, weathered ice), are becoming obsolete.

After thousands of years of use, words are vanishing as quickly as the ice they describe due to climate change.

The Artic is warming twice as fast as the rest of the globe. According to NOAA, and given today’s news referenced above, the temperature increase is accelerating. Towns and villages have to decide whether to stay and adapt or move. Given the relative paucity of local government and philanthropic financial support, the only positive outcome some see resulting from a calamitous storm or large waves would be the release of federal FEMA funding.

The Guardian reports some 230 communities are in imminent danger from rising sea levels as the sea ice retreats. The Guardian shares its own assessment:

The U.S. has no national sea level rise plan, no system to deal with displaced people. Even as the country’s first climate change refugees emerge from within its own borders, the issue is very much on the sidelines. The incoming president isn’t sure what the fuss is about, vacillating between calling climate change a “hoax” concocted by the Chinese or simply claiming that “nobody really knows” if it exists.

As we witnessed at Standing Rock in North Dakota, sophisticated advances in engineering are not the only form knowledge takes. Indigenous societies have rich sets of experiences and explanations relating to their environments. In Alaska and elsewhere, we risk losing this priceless local knowledge, which encompasses sophisticated arrays of information, understanding, and interpretation that can guide us in our interactions with the natural world in the days and years ahead.

This is one reason why the United Nations General Assembly adopted the Declaration on the Rights of Indigenous Peoples in 2007 after nearly 25 years of contentious negotiation. But while this Declaration protects the rights of native peoples, their lands, resources, and their unique cultures and traditions, international laws are no match to the laws of nature.—James Schaffer