Closing the Gender Gap at Wikipedia 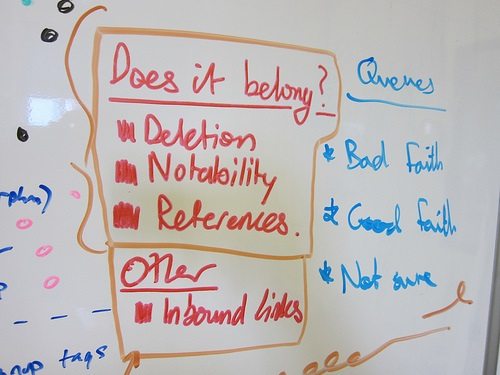 Twenty cities played host this past week to the first Art + Feminism Wikipedia Edit-a-thon, an attempt to build out Wikipedia’s entries on women artists and, through that, to encourage women to edit Wikipedia, which has a big gender gap problem among its volunteer editors. Apparently, less than 15 percent of its editors are women. This, naturally, affects content, and that flies in the face of what Wikipedia means to be to the world.

In an interview last year with Anasuya Sengupta of the Wikimedia Foundation, NPQ heard that intention quite clearly:

“When I look at all the activism that I and my comrades—my sisters—have done around the world, I think to myself, ‘What is the outcome of that activism if every day a young man or woman looks up a Wikipedia article and finds a singular worldview that is not theirs or that is biased against them in some way? What happens when a young woman looks up rape or abortion on Wikipedia and doesn’t find the information she needs? How radical is turning that around?’”

According to those who organized the Art + Feminism event, the Wikipedia pages of male and female artists of similar stature are generally different—a woman artist’s page will generally be less robust. This has resulted in “organized editorial sprints” like the Ada Lovelace Day edit-a-thon at Brown University, which was aimed at developing pages on women who have contributed to STEM fields.

But such attractions may be counteracted by what is described here as the “argumentative and trollish atmosphere of Wikipedia” that apparently sometimes reveals itself as misogynist. But Jacqueline Mabey, one of the event’s organizers, thinks some of the gender gap comes down to the fact that “We don’t raise young women to consider themselves authorities on anything.” She said, “We raise them to doubt, constantly, their work and themselves.”

Librarians are seen as the only female-dominated group that overall is a fan of Wikipedia, but Mabey says even they are cautious about editing. “These are women with double masters degrees,” she said. “I’m like, yes, you can edit it! The 18-year-old boy who doesn’t know anything is editing it, and he doesn’t even question it!”

The author of this article participated in the event, and she says it is pure and simple drudgery, but the alternative is “for women, their accomplishments, and their interests to be written out of the handiest body of human knowledge.”—Ruth McCambridge