Clowns Without Borders Performing in Refugee Camps in the Middle East 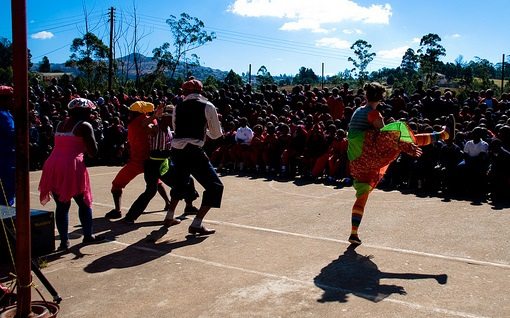 Is this for real? The international online magazine called OZY likes to find stories that are a little out of the mainstream, and this is one. OZY writer Laura Secorun Palet writes about Clowns Without Borders, an organization founded by a professional clown, Tortell Poltrona, who in the early 1990s began performing in refugee camps in what was once Yugoslavia. Since its 1993 establishment, CWB affiliates appeared in Spain, France, Belgium, Germany, Ireland, South Africa, Canada, and the United States).

In Palet’s story, the beneficiaries of Clowns Without Borders are the children in refugee camps in Jordan, the occupants being Syrian refugees from Homs. The CWB performers at the camp in Zaatari were professional circus artists from Sweden.

“It’s very important to give kids a chance to be kids again after all they have been through,” said Lilja Fredriksson, one of the performers. “Making them laugh is so much easier than I thought,” added Anja Duchko-Zuber, another Swedish clown.

It isn’t as simple as having clowns and other circus acts just show up in a refugee camp and perform as though the audience of kids were kids anywhere. “It’s absolutely crucial that performers are very prepared before they visit places like refugee camps,” Mahmoud Shabeeb, CARE’s communications officer for the Syria response, said. “Despite the best intentions, it’s very easy to have bad surprises and shortcomings when you don’t really understand the circumstances you’re working in.”

In some ways, the differences are palpable, but the kids’ reactions are like those of kids anywhere. The younger kids generally react with surprise and amazement at the clowns’ hijinks, while teenagers spot the sleights of hand behind the magic tricks and generally look a little bored.

Clowns Without Borders does not undo the family distress and psychological damage wrought by prolonged displacement from war zones, but CWB’s efforts are not to be dismissed. The CWB website notes that CWB-USA performed for 3,800 Syrian refugees in Lebanon in June and was scheduled to return this month. It isn’t just entertainment, but CWB’s Lebanon trip is meant to be part of a mine risk education effort coordinated by the Mines Advisory Group, the 1997 Nobel Peace Prize–winning organization. In 2013, CWB performers performed at the Freedom Theatre in the Jenin Refugee Camp and then toured Palestinian communities throughout Area C of the West Bank. In September of this year, CWB performers mounted shows in South Sudan.

CWB’s website is the only one that both provides assistance to refugees in conflict zones and posts silly jokes on its front page (Q: Why are pirates called pirates? A: Because they ARRRRR!). But by bringing life, humor, and joy into the terrible conditions of refugee camps in Jordan, Lebanon, and Palestine, CWB adds an advocacy component to its work, reminding all of us that there are real people, families with children, with hopes and dreams, that have been disrupted by wars in the Middle East. These refugee camps don’t get much attention in the mainstream press anymore. The plight of these refugees aren’t the subject of marches and protests in the U.S. or legislative responses from Congress, but Clowns Without Borders reminds all of us about the people who are suffering from the manmade disaster of warfare.—Rick Cohen