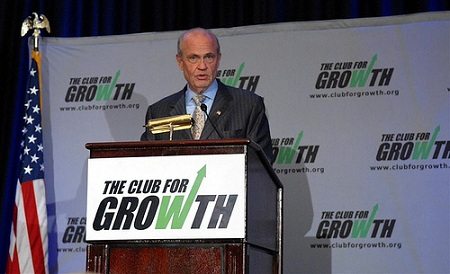 It’s one thing for all four members of the Kansas delegation to the U.S. House of Representatives to vote against Superstorm Sandy flood insurance funding (hat tip to “Victor Laszlo” on Twitter as @Impolitics), but for the Club for Growth to punish those apostate House Republicans who voted for the Sandy package is something else entirely! The first phase of Superstorm Sandy relief that passed the 113th Congress was a $9.7 billion expansion of the National Flood Insurance Program. Although the bill passed, 67 Republicans voted against it despite the pleas of Northeastern state Republicans, led by an irate New Jersey Gov. Chris Christie who lambasted, to put it mildly, House Speaker Rep. John Boehner (R-Ohio) for having prevented a vote on Sandy relief at the end of the 112th Congress.

The Club plans to “key-vote” the flood relief action, meaning that when the Club generates its ratings of House members on specific legislation, this will be one of the core elements of the measurement. The Club for Growth is one of the primary very politically conservative players in national politics, a 501(c)(4) and an affiliated PAC that supports candidates that buy into the Club’s policy priorities. Those priorities include reduced income tax rates, repeal of the estate tax (or what the Club calls the “death tax”), passage of a balanced budget amendment to reduce the size of government, Social Security reform through personal retirement accounts for younger workers, tax reform through implementation of a “flat tax” (or what the Club calls a “fair tax”), school choice, and deregulation.

The Club’s Andy Roth issued a statement implying that the organization’s stance on the Sandy vote wasn’t an opposition to helping homeowners who were affected by Sandy, but rather, just more of the Club’s opposition to the federal government’s “involve(ment) in the flood insurance industry in the first place.” The Club believes that flood insurance should be offered by the private sector and that government shouldn’t be competing with those who sell flood insurance.

Even if one accepts the logic that the free market should be allowed and encouraged to do more than it does, surely there are some things that the free market doesn’t do—or doesn’t do well—and these areas require government intervention. The reason that there is the National Flood Insurance Program is that many homeowners have not been able to secure affordable flood insurance from private insurers. It’s as simple as that.

Perhaps Chris Chocola, who heads the Club for Growth, didn’t hear many flood insurance problems raised by his constituents during his stay in Congress representing Indiana’s 2nd Congressional District. Perhaps flood insurance problems didn’t reach Club board member Ken Blackwell during his sojourn as Ohio’s secretary of state. Maybe Chocola, with his half million dollar a year salary, or libertarian millionaire real estate investor and Club board member Howard Rich, don’t have to be concerned about paying for flood insurance. But ask the homeowners in Staten Island or along the Jersey shore about their affordable flood insurance. Government is supposed to step in when the private sector does not or cannot function—regardless of what the Club for Growth might say.—Rick Cohen