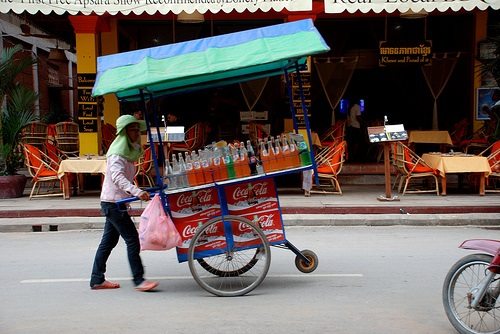 Sometimes corporate social responsibility requires more than a little bit of courage. In Cambodia, the Coca-Cola Company faces allegations that the sugar plantations that supply the firm have been grabbing land from villagers in Cambodia’s Oddar Meanchey province. According to the article, Coca-Cola had announced a policy of zero tolerance for land grabbing, and subsequently launched a worldwide audit of its sugar suppliers to examine the allegations.

One of Coca-Cola’s main suppliers is the collection of three sugar plantations owned by Mitr Phol, a Thai firm, which is among the entities facing the land grabbing charges. According to Chun Bora of the Children’s Development Association, the Coca-Cola auditors found themselves accompanied by some 30 or so police officers when they tried to meet with villagers privately. Because of the police presence—uninvited, according to Bora—the Coca-Cola representatives cancelled the meeting.

It isn’t hard to read what was going on. The villagers reasonably fear the political and police influence of the Mitr Phol company. Villagers allege that at least one politician, a senator, holds an interest in the plantations.

The social responsibility auditors hired by Coca-Cola, Arche Advisors, appear to be a firm experienced in building and managing corporate social responsibility programs for Fortune 500 corporations and their “supply chain partners.” Presumably, they might find issues with more than the sugar plantation owners that supply Coca-Cola. A 2013 report produced by Equitable Cambodia and Inclusive Development International examined the “surge in forced displacement resulting from land concessions for industrial sugar plantations in Cambodia.” The report suggested that police and security forces routinely and arbitrarily arrested, detained, and used violence against villagers defending their land from sugar plantation predators. In addition to the land grabbing, the report identified villages destroyed and at least one community activist killed in a protest action against the practice.