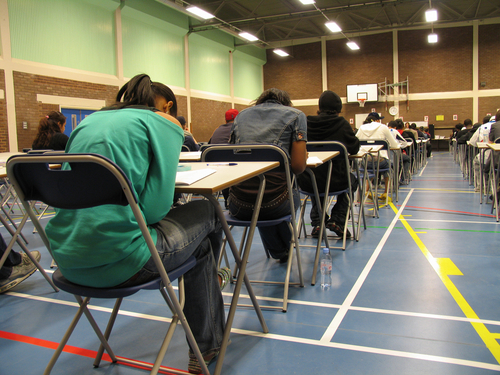 Getting into college is hard and the admissions process something of a crapshoot. The entire ordeal is further complicated by the SATs, also known as the Scholastic Aptitude Test, the credibility of which has long been undermined by the belief that test preparation favors those in the higher income brackets who can afford it.

But that may be changing soon, as per the efforts of the nonprofit behind the college admissions test, The College Board. The nonprofit is teaming up with online education nonprofit Khan Academy to offer the Official SAT Practice, a completely free interactive online SAT practice program. The free prep program will be joining the growing billion-dollar industry of college test prep, the same industry that has been taken to task for creating an uneven playing field for economically disadvantaged students.

The program is coming out just in time for the new SAT that will roll out in March 2016, which is geared toward assessing more of what students are learning in their classes. (The more obscure parts of the vocabulary section have been retired, for example, and the timed optional essay gets its own separate score.) It distinguishes itself from other available tutoring courses with its greater focus on learning the material being tested rather than on test-taking strategies.

Last year, College Board committed itself not only to making the test more transparent to test-takers but also to working to dismantle the culture of big-name test companies weeding out low-income test-takers unable to afford tutors or pricy classes.

“This is going to be the highest quality, best measure guide for these types of exams,” said DeAngela Burns-Wallace, an assistant vice provost for undergraduate studies at the University of Missouri, who reviewed the program before it was released. “That opens up access in a very different way.”

The nonprofit is looking forward to working with school districts and nonprofit organizations to reach the disadvantaged students who are most in need of the help, such as those without the Internet access to use the program. So far, a partnership with Boys and Girls Club of America is the first that has been announced.

The SAT, along with the ACT and other SAT subject tests, has long been named the culprit in promoting inequality within the educational system. Last year, the Wall Street Journal reported that students outscored their peers in lower income brackets in every section of the test. Students from the wealthiest families beat their poorest counterparts by nearly 400 points. Not only are the wealthiest students already in a better position when applying to colleges, coming from communities with better resources, but the SAT gives them some further potential advantage over low-income students, compared to whom they have had fundamentally superior educational experiences.

While studies show expensive test-preparation may not be leading students to big jumps in scores, the SAT is a reflection of the overall inequality of school systems where a higher income does equate to a better education, along with the associated slew of social issues. The College Board’s efforts are a welcome change to help reverse this unfair advantage and even out a playfield that has long been slanted against economically disadvantaged students fighting for a chance at an education.—Shafaq Hasan