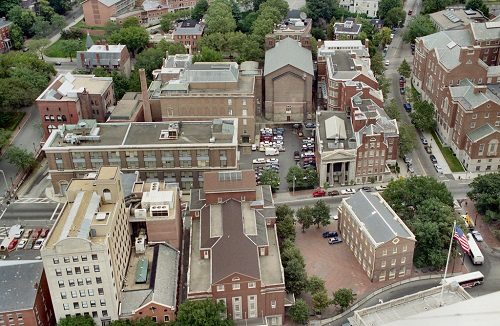 The Atlantic’s Cities website, as part of a weeklong “America 360” series on Providence, Rhode Island, recently focused on the city’s ambivalent relationship with the large nonprofit institutions that give it vitality and contribute to its civic growth, but which at the same time accelerate the erosion of its tax base.

The story starts out with the tale of the old Rhode Island Hospital Trust bank, built downtown nearly a century ago, but long out of business. Today, the building houses the library of the Rhode Island School of Design (RISD), a nationally renowned art school. It’s just one of the ways in which local nonprofits are reclaiming older buildings and parcels of land throughout the city, and properties like it are everywhere, says the article: “Grand banking halls without the banks, ornate department stores that no longer sell a thing. The city’s primary growth industry now—higher education—has moved in.”

“That’s been a positive story for a struggling downtown. But it comes at a cost,” the article explains, because universities and hospitals, which are at the center of many economic revitalization plans, don’t pay property taxes as nonprofit organizations: “That means cities like Providence are leaning on an industry whose growth, by definition, slowly chips away at the local tax base.”

Last year, nearly 40 percent of the total property value in Providence was tax-exempt, including not just the four major schools, but also hospitals, churches, cultural institutions, and government buildings. When the city faced a fiscal crisis in 2011, RISD, Brown University, Johnson & Wales, and Providence College were the wealthiest institutions in town. The city, facing a $110 million budget deficit, estimated that those four schools and the three major hospitals in town would have paid more than that in annual tax revenue, if not for their nonprofit status.

The online article by staff writer Emily Badger reports that the city and schools ultimately went through difficult and contentious negotiations that balanced the city’s financial needs against the resources of the nonprofits. But the two sectors are at odds in other college towns across America sustained by property taxes (it is less of an issue in California and some other states, where property taxes make up a much smaller percentage of local tax revenues). Providence illustrates a temporary solution, but it raises questions about the long-term viability of a community built around nonprofits being capable of funding itself and providing a home for its important institutions at the same time.

The issue first surfaced in Providence in 2003, when the city was facing a $60 million deficit. It negotiated a 20-year agreement with the four schools to contribute $48 million over time to the city, partly in recognition that their expanding campuses were taking property off the tax rolls. Then, in 2011, the city went back for more, in the belief that it was facing bankruptcy. But by then the universities’ finances had begun to erode due to the effects of the Great Recession—for example, Brown lost a third of its endowment when the stock market collapsed in 2008, and it still hasn’t fully recovered.

Badger’s piece said that some critics questioned whether higher education should retain its nonprofit status at all. And the federal government has begun pressuring colleges and universities to lower tuition in response to the outcry over skyrocketing student loans. In Providence, the four schools resisted reopening their 2003 agreement, and they started out discussions with some conditions: They would not come to the table without the rest of the city’s nonprofits, such as the hospitals; they wanted the Rhode Island Legislature to increase state contributions to municipalities that are nonprofit centers; and they wanted the city to negotiate concessions with unions and retirees.

Eventually, the schools decided on a strategy that was transactional—they weren’t giving away anything unless they received something in return, saying that such an agreement could help them argue that they were keeping their nonprofit status intact. Ultimately, each of the colleges negotiated their own deals; for example, additional payments in exchange for acquiring city-owned property at a discount, or leases on new parking spots.

The city will not get the full amount it would have collected if the universities and hospitals were any other kind of property-holder, says The Atlantic – Cities, but it did get about half of what it initially wanted from the seven big tax-exempt nonprofits. The payments are publicly described as “voluntary,” which is typical of the way PILOTs, or payment in lieu of taxes, are characterized.

This is a national issue, and NPQ has covered similar situations in municipalities large and small. Earlier this year, the city of Pittsburgh sued the University of Pittsburgh Medical Center, PA’s largest employer and the richest nonprofit in town, trying to strip it of its status. Boston has a less contentious payment program that it stresses is voluntary.

The article points out that the new arrangement “underscores one of the reasons these ad-hoc local deals are ultimately unsustainable, both for the host cities and for the schools that agree to them. When these agreements expire, Providence will likely still have an economy built on nonprofits.”

But there is another, more fundamental issue here: the spectacle of two institutional sectors of American society, government and nonprofit institutions, battling it out over scarce financial resources. The irony is that both sectors are pledged to provide public benefits that help the very same communities and the people in them. They should be working together, rather than at cross-purposes.—Larry Kaplan