Color Guard at the NYC Pride March Will Be Boy Scouts 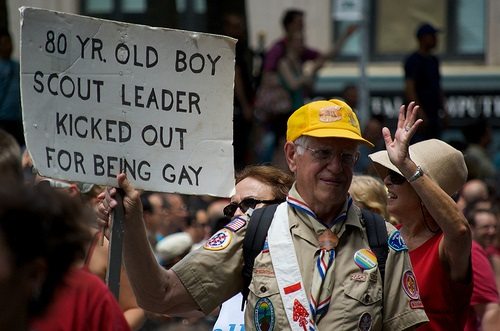 How long will the BSA hold out on its regressive exclusionary policy excluding openly gay scout leaders? Two weeks ago, Attorney General Eric Holder called it a “relic of an age of prejudice” and parts of their operation are beginning to peel off, including the Greater New York Councils, which has endorsed a comprehensive nondiscrimination policy, saying also that such a stance is “the right, moral, forward-looking policy for the BSA [to adopt] nationwide.”

In league with that, the color guard for the 44th Annual NYC Pride March scheduled for this coming Sunday will be made up of contingent of openly gay and allied Boy Scouts, Eagle Scouts, and volunteers. Included in that contingent is 87-year-old David Knapp, who was forced to leave scouting after 55 years when officials learned he was gay. The Brooklyn chapter of advocacy group Scouts for Equality will present the American flag while the national anthem plays at the opening ceremonies and then will lead the march.

“We are grateful for this invitation from NYC Pride, and we are honored and humbled to provide this patriotic service to the LGBT community of New York,” said Stacey Sarnicola, Brooklyn chapter lead of Scouts for Equality in a statement published by GLAAD Monday. “Since 1978, the BSA has held a policy that excluded gay youth and parents. While the BSA voted last year to end the policy barring gay youth from participation, it has made no change in its membership policy regarding adults. The Greater New York Councils’ inclusive policy is what gave me permission to allow my son to join the Boy Scouts. It’s what gives us permission to march, and it gives us hope for a BSA for all in the near future.”

Dave Studinsky, speaking for march organizers, warmly welcomed Scouts for Equality to the route as Color Guard. “Our 2014 theme is ‘We Have Won When We’re One,’” he said, “and this message resonates well with Scouts for Equality’s mission. From their participation in our step-off ceremony through the moment they pass the historic Stonewall Inn, may the scouts’ joint display of our nation’s colors and the rainbow flag remind us all that the LGBT movement seeks not tolerance, but acceptance as equals.”—Ruth McCambridge