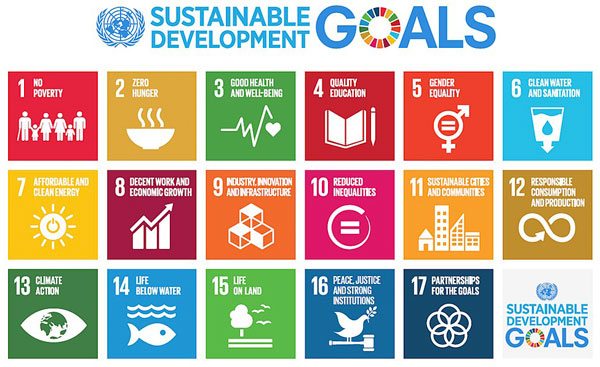 The Sustainable Development Goals are both broader and also more ambitious in scope than the UN’s Millennium Goals were. Notably, the UN’s millennium goals did not promise to end poverty, but rather sought to cut extreme poverty in half between 1990 and 2015. That goal was achieved five years early, in 2010. Even so, 800 million people worldwide still live in what the UN defines as extreme poverty, earning less than $1.25 a day. The very first two Sustainable Development Goals, by contrast, aim to “end poverty and hunger everywhere by 2030.”

In addition to being more ambitious, the Sustainable Development Goals are broader, with the number of overall goals increased from eight to 17. Some of the new goals arguably just provide greater specificity in the area of environmental sustainability. Six of the goals— clean energy, clean water, sustainable cities, responsible consumption and production, protection of life on land, and protection of sea life on water—could fit within that category. But others—such as reduced inequality, decent work, infrastructure, and strong institutions—are entirely new.

The bottom line is that the UN framework introduces a much broader agenda that could conceivably touch nearly every community. As Diana Campoamor wrote for NPQ in 2016,

Many of us hear “sustainable development goals” and picture a poor rural village in Sierra Leone, or a hungry child in Bolivia. But the 17 goals that all 193 countries that are members of the United Nations (UN) adopted at a summit in 2015 aren’t just a framework for faraway international issues. In fact, many of the issues addressed by the Sustainable Development Goals (SDGs) are all too real in the US: gender inequality, poverty, hunger, quality education, environmental sustainability…the list goes on.

“Local Leadership, Global Impact,” a report authored by Natalie Ross, vice president of external relations at the Council on Foundations, the leading US community foundation trade association, was released in conjunction with the North American Community Foundations Summit, a meeting that took place in Mexico City in early February. In the report, Ross writes that the combination of “Unmatched convening power, together with a mission that relates directly to improving the social fabric of communities, makes community foundations ideal partners to achieve the SDGs.”

“The report,” adds Cheney, “evaluates how the more than 1,800 community foundations operating around the world can connect their local work to this global agenda, highlighting what is working, and outlining 10 steps for how community foundations who aren’t already focusing on the SDGs can get started.”

Those 10 recommended steps are as follows:

“Community foundations are grassroots partners that bring the SDGs to life in a place-based strategy,” explains Ross. “They can, at the same time, be hyperlocal and be channels for philanthropy that goes beyond their community.”

As noted, community foundations outside the US don’t have near the assets of their US counterparts, largely because they are so new and haven’t had the time to build up large endowments. Still, these foundations can develop programs that are designed by residents, rather than imposed from the outside and can play an invaluable “scouting” role, helping funnel international funder dollars to those programs. As Ross notes, community foundations in the Global South “tend to work more like operating foundations, implementing programs on the ground.” Earlier this month, NPQ’s Cyndi Suarez wrote about how the Puerto Rico Community Foundation effectively was doing this by getting money out quickly to the community groups most in need of immediate funds in the wake of Hurricane Maria. For her part, Cheney identifies many other examples of this approach, including in Colombia, Indonesia, Ghana, Kenya, and Zambia.

Emmett Carson, chief executive officer and president of Silicon Valley Community Foundation—the world’s largest community foundation (with $13.5 billion in assets) and also the third-largest foundation (after Gates and Soros and before Ford)—remarked at the 2018 Corporate Philanthropy Institute in San Francisco that, “Our democracy, our nation, and our world are at risk today.” Carson called on corporate social responsibility practitioners to use the SDGs to organize their actions. Cheney added that Carson also “made an appeal for Puerto Rico, asking people ‘to go outside business as usual’ in order to contribute what they can, and asking that they do so together with the Puerto Rico Community Foundation.”—Steve Dubb