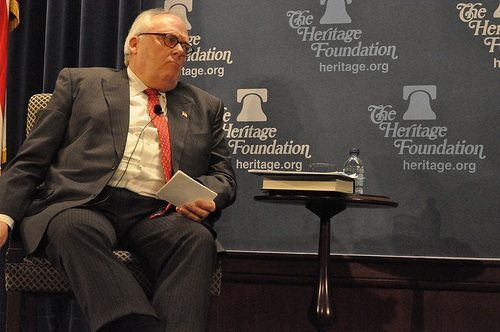 In what seems like a tectonic shift in the world of conservative nonprofit think tanks, a bunch of the most powerful and prestigious—Americans for Tax Reform, the Cato Institute, the Kemp Foundation, the Hispanic Leadership Fund, and the American Action Forum—came together on a press call to lambaste the longtime exemplar of conservative political thought, the Heritage Foundation. Under the leadership of its new CEO, former South Carolina senator Jim DeMint, Heritage recently issued a hardline report against immigration reform. Heritage’s erstwhile ideological allies on the right basically think the report stinks.

The report, entitled, “The Fiscal Cost of Unlawful Immigrants and Amnesty to the U.S. Taxpayer,” purported to calculate the costs of providing four kinds of government benefits to potentially legalized immigrants: direct benefits, such as Social Security, Medicare, unemployment insurance, and workers comp; means-tested welfare benefits (including Medicaid, food stamps, public housing, and TANF); public education; and “population-based services,” such as “police, fire, highways, [and] parks….[which] generally have to expand as new immigrants enter a community.”

The conservative organizations on the press call devastatingly trashed the Heritage methodology, which ignored any and all benefits from immigration, like increased GDP and productivity, to find a $6.3 trillion deficit to the American taxpayer when comparing what immigrants will consume in government benefits versus what they will pay in taxes, without any upside. The press call wasn’t merely people disagreeing with Heritage. The participants took apart the Heritage analysis, leading to the conclusion of Douglas Holtz-Eakin of the American Action Forum that Heritage’s immigration report “really misleads.” Although not participating on the call, the conservative American Enterprise Institute has also issued a critique of the Heritage study. Even the author of a 2006 Heritage study on the costs of immigration has denounced this new one.

An op-ed co-authored by DeMint and study co-author Robert Rector attacks immigration reform based on the costs to government from providing benefits to populations afforded amnesty under the legislative package contemplated by the Senate’s “Gang of Eight.” Their analysis is that the net deficit to taxpayers will be a cost of $28,000 for each newly legalized immigrant. They describe their analysis as conservative, not “factor(ing) in the waves of unlawful immigrants who could pour into this country hoping for another future amnesty.”

This might have been expected to some extent. As one of the senators furthest to the right and least likely to be included in bipartisan efforts (unlike his fellow South Carolinian Lindsay Graham, who unfathomably is seen by many Republicans in his state as too liberal), DeMint’s leadership of Heritage was hardly going to spur it into leading the Republican Party off the periphery and back into the mainstream of conservative American political thought. To have all of these groups come together for some tough talking to DeMint and Rector, his chief researcher, may suggest that Heritage’s time as the flag-bearer of conservative Republican thought may be coming to an end.

Which of these groups will take its place? Our bet is on the American Action Forum, headed by economist Douglas Holtz-Eakin. Holtz-Eakin is an economist, a former director of the Congressional Budget Office, and, before AAF, the chief economic advisor to Republican presidential candidate John McCain. Do you see a vibrant future for the Heritage Foundation or, like us, do you sense a changing of the ideologically conservative guard? –Rick Cohen