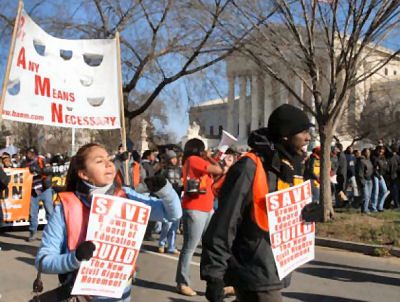 Many people have had a mixed reaction to the Supreme Court case this past June regarding affirmative action at the University of Texas. SCOTUS sent Fisher v. Texas back to the lower courts for further review, but both sides of the affirmative action debate declared victory, according to Libby Nelson, writing for POLITICO. However, the U.S. Department of Education has interpreted the 7–1 court decision as an affirmation of affirmative action. Education has sent a “full speed ahead” message to colleges to continue using race in admissions “as long as they do so carefully,” according to Nelson.

The case involved the University of Texas policy of admitting the top 10 percent of graduating seniors from the state, but then using race as a factor to admit additional students who were not in the top 10 percent. A white student, Abigail Fisher, didn’t make the 10 percent cut and sued. With the case back in the lower courts, the UT policy still applies for the moment. Another case (this one from Michigan) regarding affirmative action, Schuette v. Coalition to Defend Affirmative Action, is expected to get to the Supreme Court sometime around October 15th, and is a challenge to a voter-approved affirmative action policy applying to public education and to employment.

However, the Education Department and the Department of Justice have interpreted Fisher as “a very clear signal that 40 years of precedent still stands,” according to Catherine Lhamon, the director of the Education Department’s civil rights office. The statement from Education and Justice encouraged universities to continue using “narrowly tailored” affirmative action policies and to continue to use all legally available “in pursuing a racially and ethnically diverse student body,” according to Jocelyn Samuels, the assistance AG for civil rights at DOJ.

As much as supporters of affirmative action welcomed the DOJ/Education policy guidance, it didn’t get quite as warm a reception from opponents. Roger Clegg, the president of the Center for Equal Opportunity, said (according to Nelson) that the statement from the two federal agencies was akin “to the FBI encouraging local police departments to enthusiastically engage in legal forms of racial profiling.”

Affirmative action policy issues continue to engage American politics on a visceral level. It used to be a big topic of discussion among all kinds of nonprofits. Where are nonprofits on affirmative action now, in the wake of Fisher and as the court begins to address Schuette?—Rick Cohen