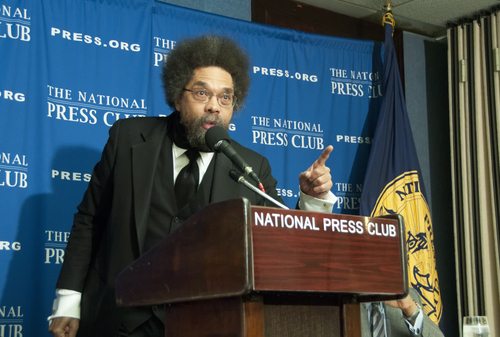 Two years ago, Union Theological Seminary professor Cornel West called President Obama a “Rockefeller Republican in blackface.” Last year, West termed President Obama a “war criminal.” In 2010, West declared that Obama’s policies discriminate against African-Americans with “racist effect and consequence.” West is unrelenting in his criticism of the president and has added to his analysis in an interview with Thomas Frank of Salon.

Frank characterizes West as “a man who deals in penetrating analyses of current events, expressed in a pithy and highly quotable way.” Though frequently generating sharp reactions pro and con due to his “pithy” observations, West merits attention because he and television talk show host Tavis Smiley have taken their “Poverty Tour” across America to raise questions about America’s poverty in ways that no other “public intellectuals” seem to ever do. In 2012, he and Smiley coauthored The Rich and the Rest of Us, tackling the nation’s income divide in ways that presaged the highly touted, more academic research of Thomas Piketty.

You might not like his tendency to be more than a bit pompous, but West says things that most public figures won’t dare utter—even if that’s what they truly believe. In his interview with Frank, in the wake of the killing of an unarmed black teenager by a white police officer, West took off on Obama once again, calling out Obama as having “posed as a progressive and turned out to be counterfeit.”

West says that in his campaign, Obama “posed as if he was a kind of Lincoln…. It’s a sad thing. It’s like you’re looking for John Coltrane and you get Kenny G in brown skin.” He attributes the broad disillusionment with Obama among liberals to Obama’s tendency to always search for the middle ground, to “go straight to the establishment and reassure them that you’re not too radical, and try to convince them that you are very much one of them.”

As he has in the past, West particularly takes off on the Obama administration’s allegiances with big money, terming his administration “the Wall Street presidency.” “There’s one law for us and another law if you work on Wall Street,” West charges, taking special aim at Attorney General Eric Holder, who “won’t touch the Wall Street executives [because] they’re his friends.” The most Holder does, West says, is fine the big bankers some money, which “is just a tax write-off for these people.” Holder, of course, was appointed by President Obama, who appointed Larry Summers and Tim Geither from the “Robert Rubin” crowd to run the economy as, in West’s words, “neoliberal, deregulating free marketers.” For them, West says, “poverty is not even an afterthought.”

As this newswire is being written, Michael Brown’s body is being laid to rest. Frank’s questions to West about Ferguson and the abuse of police power elicited a sharp response: “It has been going on for a long time. The Obama administration has been silent. Completely silent. All of a sudden now, you get this uprising and what is the response? Well, as we know, you send out a statement on the death of brother Robin Williams before you sent out a statement on brother Michael Brown.” West doesn’t necessarily say what Obama might do in response to the Brown killing, but he eviscerates Obama on optics, on sending Holder to Ferguson when Holder is expected to leave the administration by the end of the year, and on the role of Al Sharpton as “low-quality black leadership…[and] a cheerleader for Obama.”

That may be the most important part of West’s interview with Frank—not the almost automatic criticisms of Obama’s middle-of-the-road political leadership, but the condition of the nonprofit and civil rights community that should be holding Obama and Holder to higher standards. He says that Sharpton, whom he says doesn’t inspire thoughts of integrity, has pledged never to say anything critical about Obama and has “no prophetic integrity in his leadership.” There’s the key. It’s not just Sharpton by a long shot. Many progressives and others have been reluctant to say much that’s critical of the Obama White House. We have in the past declared that the worst thing the nonprofit sector can do about and for the Obama administration is to “be quiet.” While it might be difficult to predict what will happen to Officer Darren Wilson, there may be an impact from Ferguson more pervasive than just the question of whatever justice happens to be for Mike Brown and his family. Ferguson may have revealed some fissures in the American civic infrastructure and within the civil rights community, suggesting that some rebirth of both is seriously needed.

Does that sound pessimistic? West doesn’t think his comments are. “It’s not pessimistic, brother, because this is the blues. We are blues people. The blues aren’t pessimistic,” he concludes. “We’re prisoners of hope but we tell the truth and the truth is dark. That’s different.”—Rick Cohen