Could ‘Radical Tough Love’ Improve The Internet? These Women Think So. 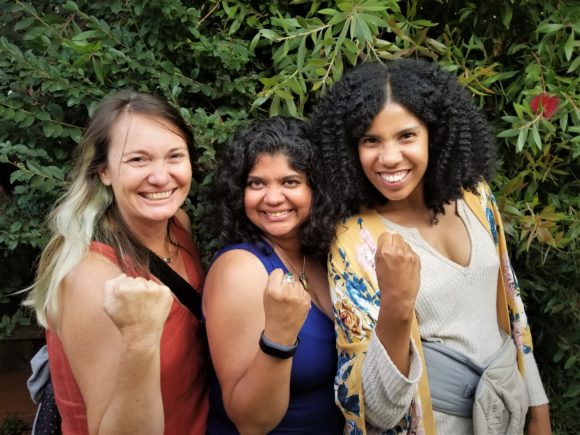 In honor of International Women’s Day, we speak to a pair of women who are on a quest to transform Wikipedia, one of the Internet’s most popular websites. “It also has the biases of the real world internalized in its working and in its content,” says Anasuya Sengupta, a feminist activist from India and Nonprofit Quarterly board member.

Sengupta was previously Chief Grantmaking Officer at The Wikimedia Foundation, the nonprofit that operates Wikipedia. “We know that 80 percent of the content on Wikipedia is edited by 20 percent of the world, primarily those from Europe and North America,” Sengupta tells us. “We also know that only one in nine or ten editors self-identifies as female.”

Sengupta and her colleagues Siko Bouterse and Adele Vrana, are looking to change that. Vrana is Afro-Brazilian and has a background in nonprofits and community organizing. The women worked together at the WikiMedia Foundation but left to set up Whose Knowledge? which strives to center marginalized voices on the Internet. It’s a campaign that Vrana says allows them to be “unapologetically feminist and radical, to really re-imagine what the Internet could be.”

On International Women’s Day, they launch #VisibleWikiWomen, a campaign to bring more faces and more biographies of notable women around the world onto Wikipedia. In this podcast, they discuss the barriers that prevent many women from being considered ‘notable’ enough to Wikipedia editors, and they talk about the broader importance of decolonizing the Internet. “We – Black women, brown women, LGBTQI, indigenous folks – were not there defining and creating what the Internet is today,” Vrana explains. “The Internet of the future needs to include the ones that were not there for the making of it.”

Meanwhile, Sengupta emphasizes that when all is said and done, they are, in fact, Wikipedia fans and notes that the Wikimedia Foundation is helping to fund the #VisibleWikiWomen campaign. “If you love something, you want to improve it,” she explains. “This is our version of radical, tough love.”

If you would like to take part in this year’s #VisibleWikiWomen campaign, you can find the hashtag on all social media platforms. To contribute a photograph of a notable woman, go to Whose Knowledge’s website for information on how to upload the image to Wikipedia, and you can send any questions about getting involved with the campaign to [email protected]

Nature: Build an internet for, and from, us all

The Guardian: We’re all connected now, so why is the internet so white and western?