Countering the Attacks on the War on Poverty with Facts 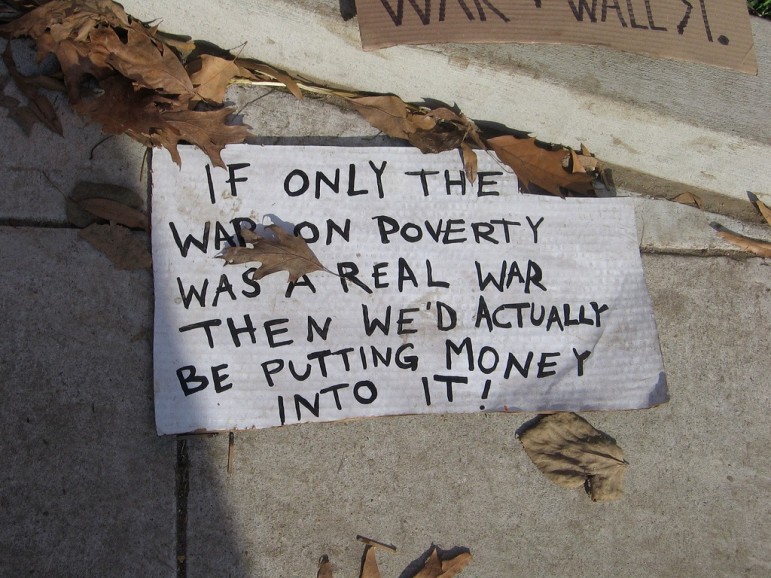 The vituperative attacks on the War on Poverty sound a little gleeful or mean-spirited or nutty—sometimes all three. A quick review of recent press coverage would lead almost anyone to think that Head Start, Legal Services, community health centers, food stamps, ESEA Title I support for education, the Job Corps, and a host of other programs had no connection to the War on Poverty but materialized sui generis to provide vital services to the poor. To the contrary, these and an array of additional programs were conceived and started as components of the War on Poverty in the 1960s and somehow survived over the years despite attacks that started on Day One of the anti-poverty movement and never let up.

Listen to the array of people who inveigh against the War on Poverty and against the people who have been helped from sliding deeper into poverty as a result of the nation’s tepid but nonetheless critical resource infusion to help the poor:

These and other similar statements in the press abound, shaping the public perception that the War on Poverty has been inconsequential at best and disastrous at worst for people in poverty. These people don’t cite—and probably haven’t read—the analyses coming from organizations such as the Center for Budget and Policy Priorities saying that a number of federal social safety net programs lift and keep millions of Americans out of poverty, notably Social Security, the Supplemental Nutrition Assistance Program (food stamps), the Earned Income Tax Credit, the Child Tax Credit, Supplemental Security Income (SSI), and housing assistance. We would add the new availability of health insurance through the Affordable Care Act as one more federal program that has cushioned lower income households from disastrous, income-draining, poverty-inducing conditions. Despite the evidence that millions of people would sink into poverty were it not for the safety net and various War on Poverty programs, Republican budget-cutters continue to take aim at gutting the budgets of many of these federal initiatives. Maybe they think that living in poverty is a preferred, sleepwalking choice for the millions of Americans with incomes below the federal poverty level—that by slashing at the safety net, poor people will suddenly awaken to a need to leap out of poverty.

Maybe these conservative politicians and commentators would better be served by some thoughts from Jay Bookman in the Atlanta Journal-Constitution who observed that today’s Republicans like Jeb Bush have turned the War on Poverty into a war on the poor:

We know that human services agencies have long been promoting the notion of “reframing” human services. The reframing initiative is “in response to the threat of deep and potentially sustained cuts to programs critical to the human development system” and aims to get national networks “to deploy common messages to the Congress, the White House, and the American people.” All well and good, and probably necessary, but sometimes reframing sounds like advertising, a search for the pitch lines that will resonate with listeners and evoke more positive reactions. That’s fine, but something deeper is brewing when it comes to anti-poverty programs: a perception that the nation’s poor and very poor have been made comfortable through government programs, that the poor would rather opt for continued poverty because of the comfort of federal programs, that their poverty is often by choice rather than by circumstances or other factors. The attack on the War on Poverty is frequently no more than how Bookman described it, as a war against the people who are poor. Sadly, that isn’t just “framing.” It is ideological, often with an overlay of race. In addition to “reframing,” there’s a need for “re-mobilizing” and “re-empowering” the poor, as the War on Poverty was meant to do—and prevented from doing in many ways—so that the poor can tell Ben Carson, Jeb Bush, Ted Cruz, and others what they really want and need.