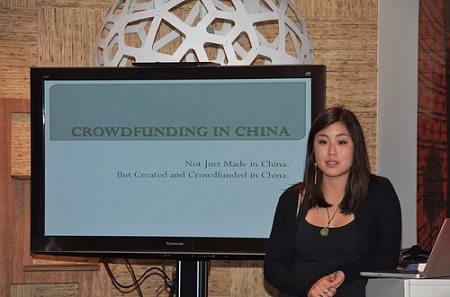 According to the Beijing Review, Cao Shengkang wasn’t doing very well after having lost all of his money in the stock market and then suffering a bitter divorce. He worked as a masseur to support his teenage daughter and was, according to the Review, contemplating suicide. But the blind masseur chose a different route to pull his life together, deciding to go mountain climbing. Reaching the top of a snow-capped mountain, Cao decided to change his life. He closed his massage clinic in Beijing and decided to become the first blind person to backpack around the world.

Crowdfunding enters the picture due to the challenge of financing the trips. Cao went to a Chinese crowdfunding website, Demohour.com. Cao’s goal was to raise $9,524 (60,000 yuan). Donors would receive postcards from his trips, a photo album, or, for some, vouchers for massages. Cao’s Demohour bid looks likely to fail, though he said that regardless of the crowdfunding shortfall, “I will continue to fulfill my dream, no matter what.”

The Demohour.com site is only a little over a year old, founded by a 2009 MBA graduate of Stanford University. It seems to be similar to Kickstarter, with a number of projects to support artists, filmmakers, and designers. In its first year, it has raised three million yuan ($476,190) for 150 successful projects (that is, projects that raised enough money to reach their goals), the largest being a cartoonist’s book on her battle with lymphoma.

Like Kickstarter, it’s clear that some of the projects are of limited social value, to put it mildly, including the “Bra for Love” (you have to see it to believe it; we can’t offer a description here), though Demohour’s founder suggests that the sometimes off-the-wall creativity of crowdfunding sites like his is important to China. “Creation is the way people try to express themselves,” he tells the Beijing Review. “That’s something in short supply in China because the Chinese are poor at expressing themselves.”

Interestingly, the Beijing Review article highlighted Demohour project examples that were all examples of individual entrepreneurship of sorts, but our interest is Demohour’s promotion of nonprofit or charitable projects. Nonprofit projects don’t make Demohour’s “classics” page for the most part, but we found a few among the recently posted projects, including a fundraising effort for the “reject fur” campaign of the Asian Animal Protection Team.

Fundraising techniques are increasingly going global. In addition to the presence of charities in the Demohour project list, we were also interested in the politics of crowdfunding in China. How much (if at all) does China’s government limit the kinds of projects that pitch themselves on Demohour? —Rick Cohen