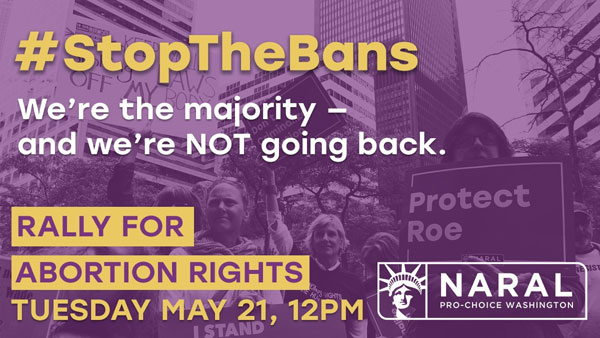 According to Teen Vogue, more than 500 different protests of state-based abortion bans were held in all fifty states and Puerto Rico yesterday in a national day of action. Among the organizers were the American Civil Liberties Union (ACLU), Planned Parenthood Action Fund, and NARAL (National Abortion Rights Action League) Pro-Choice America under the #StopTheBans banner.

Georgia is one of four states—along with Mississippi, Kentucky, and Ohio—that have passed laws to ban abortion after cardiac rhythm can be detected. Ilyse Hogue, the president of NARAL, commented before the protests: “Some people didn’t believe even with Justice Kavanaugh on the bench that Roe was threatened. But these laws show that it absolutely is, that there is a goal coming out of these states with a national anti-choice movement to criminalize abortion and punish women.”

“I obviously was not born when Roe v. Wade was passed, so I grew up with the privilege of knowing that abortion was always an option for me if I were to ever get pregnant and I didn’t want to be,” said 17-year-old Anusha Chinthalapale, the DC, Maryland, and Virginia regional coordinator for Women’s March Youth Empower. “Especially with state legislatures now all over the country passing these disruptive and unconstitutional bills, it’s becoming increasingly difficult for me to understand and comprehend what it means to be a woman in American society, especially in this current political era. I feel it’s important for me to be here because at this point it’s in my hands to uphold the constitution because the generation before me, they’re almost done. And I’m next.”

The emphasis was on changing political representation, a connection not lost on Chinthalapale.

“Luckily, in about a month, I’ll be able to vote, so I’m very, very much looking forward to putting that privilege to good use and voting in a way where my rights are secured,” she said. “Being at that turning point in age and living in this current political era have kind of forced me, not to grow up quicker, but to get involved quicker….This is definitely an issue that I knew was a problem growing up, but it wasn’t until I hit my teen years when I realized I can use my voice to talk about this.”

BuzzFeed also reported that representation from young women was strong, backing that up with a series of tweets.

However, Andrea Young, executive director of the ACLU of Georgia, where a particularly extreme bill was passed, says the campaign is about more than laws. “We are working not only to prevent this bill from going into effect,” Young says, “but also using this energy to actually expand women’s access to reproductive health care. That means Medicaid expansion. It means making sure women have access to reproductive health care at every stage of their life and that it’s affordable and accessible for all.”—Ruth McCambridge