Crowdsourcing Rides to the Rescue when Billionaire Blocks the Beach 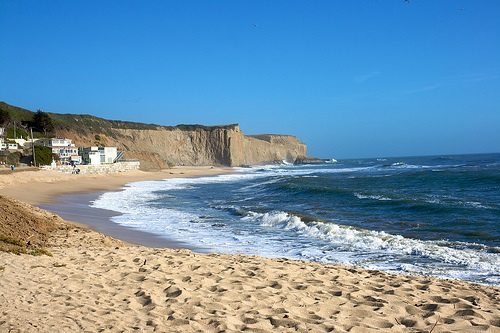 Green energy maven Vinod Khosla is fighting with the nonprofit Surfrider Foundation and the California Coastal Commission over access to a beach south of San Francisco that he believes he owns. In California, of course, there is a law requiring that beaches with a history of accessibility be kept that way, and the Coastal Commission is responsible for monitoring (evil) attempts to close access.

Vinod Khosla is a cofounder of Sun Microsystems and an investor both in green energy ventures and the Democratic Party. He also spent, in 2008, more than $30 million on 56 acres behind Martins Beach, a popular surf spot, and that includes a road which provides the only direct access to the beach. The previous owners allowed the road to be used, and even ran a little parking business and convenience store on the site, but Khosla wanted to change all of that—after all, he does not need the income. So he sued San Mateo County, which had warned him that he would need to maintain the beach access provided by the previous owners.

Khosla lost the suit, but two years after buying the property, he locked the gate to the road and the parking lot and posted security guards and signs reading “Beach closed, keep out.” Surfer arrests ensued, as did any number of suits.

But such matters may end up in court less often now since California Governor Jerry Brown signed into law in June a measure that gives the Coastal Commission the power to fine property owners $11,500 a day for illegally blocking access to public beaches. This will ideally make consequences for blocking access swifter and more consistent. And in July, the Coastal Commission put up a website asking for people’s photos documenting their use of the beach.

Charles Lester, executive director of the Commission, said, “Our charge is to protect public access to land along the shoreline, and one of the ways we do that is to understand what the historic use of an area might be as a way to establish the public’s right to access an area.”

“We really applaud their efforts and look forward to working with them,” said Mark Massara, an attorney with the Surfrider Foundation, “It’s long past due for the state of California to speak up on behalf of public access to Martins Beach. This is the state providing an opportunity for people to speak up about their use of the beach over many years. This would further enhance the commission’s prosecution of his violations of law.”

An editorial in the L.A. Times summarizes the situation this way: “The reason the pathway should stay open is that the public has been using it for nearly 100 years. The Coastal Commission has begun a survey to make a case that the public has “prescriptive rights” to it by virtue of that long tradition. Already, dozens of beachgoers have submitted declarations documenting—sometimes with photos—their use and their families’ use of the pathway going back to the 1920s.”—Ruth McCambridge