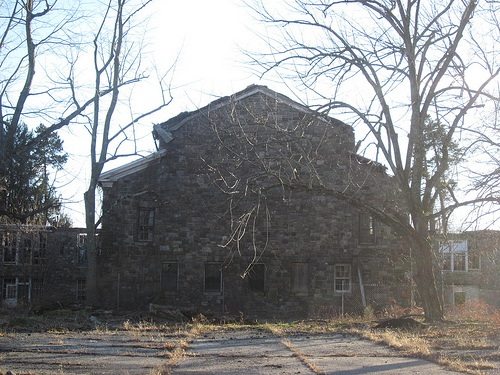 When advocates were pursuing deinstitutionalization in the seventies, there were a few who recommended that if you wanted to deinstitutionalize for good, you should actually tear down the property in question whether that be a prison, youth psychiatric facility or an isolated home for people with developmental challenges.

In Rockland County, approximately 350 acres was purchased by the town of Orangetown in 2003 after the Rockland Psychiatric Center, opened originally in 1931, downsized finally in 1997. That land is still being redeveloped as can be seen here in this recent planning document which is a fascinating read. And its uses and planned uses are many but one of the more innovative is the housing provided for first responders in the area.

In 2004, Orangetown, New York leased 11 vacant houses on the grounds of the former Rockland Psychiatric Center to create housing for firefighters and emergency services personnel, who are often priced out of the communities in which they volunteer and work. Orangetown provided $15,000 in funding, Rockland County provided $450,000, and EMTs and firefighters put in sweat equity to renovate the homes, which now house 23 people, including 11 volunteers. Since then, the development has operated without significant financial support from Orangetown.

But Dave Schnitzer, chairman of the Volunteer Emergency Services Coalition and the former chief of the Blauvelt Fire Company, says that the development is showing its age, and the nonprofit now needs $50,000 to repair kitchen units, water heaters, windows, leaky pipes and roofs. The town council seems inclined to make it happen, in a program that’s the first of its kind in New York.

We are interested. Do such programs exist elsewhere?—Ruth McCambridge