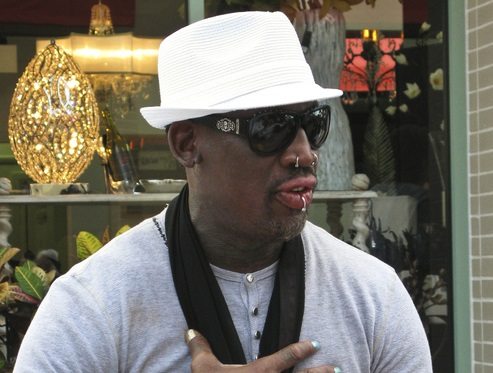 Dennis Rodman may have been the greatest rebounder ever to play in the National Basketball Association, but his deepening friendship with North Korea’s Kim Jong Un is troubling. Rodman is back in Pyongyang again to train North Korean basketball players for a game against some unnamed former NBA stars.  The game will be on January 8th, in honor of Kim’s birthday.

Rodman isn’t in North Korea on a humanitarian mission; he is being sponsored by Paddy Power, an online sports betting firm based in Ireland. It’s not clear what is in this for Paddy Power, given the unlikelihood that many North Koreans will be placing bets today on the Chicago Bulls versus the Oklahoma City Thunder in basketball or Phil Taylor versus Michael Smith in darts. This isn’t Rodman’s first trip to North Korea, having stopped in to visit Kim twice before, calling Kim “a friend for life.” A Paddy Power spokesman for Rodman says that this trip, and apparently the upcoming basketball game, will “prove once again that sport has the power to rise above all issues.”

That doesn’t do much for Kim’s uncle, Jang Song Thaek, who was the nation’s second most powerful figure and seen as a mentor for Kim, but was executed by his mentee’s government last week, accused of trying to overthrow Kim Jong Un’s government. In a similar vein, Rodman’s laughing it up with the North Korean dictator is not particularly funny for the more than 200,000 people in North Korea’s gulag of labor camps.

Rodman’s visit also lacks humor for the family of Kenneth Bae, a Korean-American who was arrested just over a year ago and sentenced to 15 years of hard labor for allegedly trying to overthrow the North Korean government for religious activities. Rodman’s position on Bae has changed as his friendship with Kim has deepened. Earlier this year, he asked Kim to “do him a solid” and free Bae, but during his visit to Pyongyang this past September, Rodman told the press that he wasn’t there to talk about Bae, adding, “Ask Obama about that, ask Hillary Clinton about that, ask those assholes.”

Bae is the longest-serving American prisoner of North Korea since the end of the Korean War. According to his mother, who got to visit him briefly in October, Bae’s health is deteriorating, with diabetes, an enlarged heart, and gallstones. Perhaps it is because Bae’s work as a Christian missionary is somewhat uncommon and unfamiliar to many Americans that his imprisonment doesn’t get much attention except when the former Chicago Bulls player shows up in the DPRK. But one doesn’t have to be a Christian, much less a missionary, to know that North Korea could and should release this man back to his family. Vice President Joe Biden recently called on the Kim regime to let Bae return to his family, but the North Korean government has not relented.

Rodman’s conception of sports rising above all issues would be more persuasive if the rebounder would lift Bae out of his imprisonment.—Rick Cohen