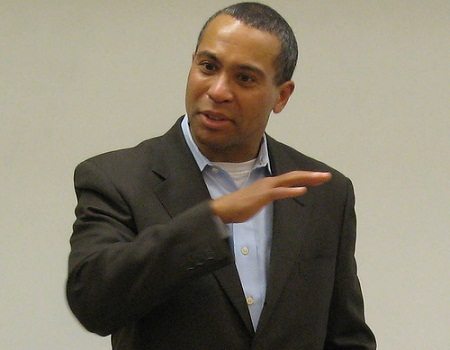 The cuts aren’t all that big, says Gov. Deval Patrick (D-Mass.). Facing a $540 million budget gap that he says is due to uncertainty about the fiscal cliff, the governor ordered “sensible and prudent” spending cuts. For programs in the executive branch of government, Patrick announced a spending cut of $225 million. That roughly translates to a one percent cut in agency spending, a small piece of the state’s $32 billion budget. The governor said that the spending cuts, while painful for the people served by those agencies, were small enough to be bearable, and people affected had no reason to panic.

It is interesting that the governor is making the cuts based on the potential impact of the fiscal cliff and not based on state revenue tallies, which have been rising in recent months. Patrick suggested “that uncertainty and the resulting slowdown in economic growth is the direct cause of our budget challenges.” The Associated Press noted that Associated Industries of Massachusetts, a business group, said that the fiscal cliff was causing a drop in business confidence, with a majority of employers now feeling pessimistic about economic conditions.

What is going to be cut? Outside of the $225 million, the governor will be cutting one percent of unrestricted local aid to cities and towns and $98 million in federal revenues for safety net programs for low income persons and families. Within the $225 million, the cuts include $3 million for the implementation of state health care reform programs, $3 million for state agency costs associated with Superstorm Sandy clean-up, and $44.3 million in Family Homeless Services funding, which the governor’s letter to the legislature noted will occur at a time when “the state continues to see historic levels of demand for emergency housing services.”

The Massachusetts cuts will reverberate through the state’s nonprofits, which will find themselves without some measure of the state funding that they had relied on. The Bay State’s economy has been on the upswing for some time, yet the governor feels compelled to make cuts. It would appear that the state’s nonprofit service providers will be compelled to find alternative revenues to meet service demands that simply won’t abate.—Rick Cohen