The nation’s network of 4,862 community hospitals, which includes 2,845 nonprofit hospitals, 983 publicly owned hospitals, and 1,034 for-profit hospitals, is not known for its ability to turn on a dime. Yet as editor Mike Miliard writes in Healthcare IT News, “Change is dominating the state of population health management in 2017.”

What is “population health management?” Healthcare jargon can be thick, but the phrase just means keeping people healthy. And how do you keep people healthy? To use more jargon, you address the “social determinants of health,” a fancy way of saying that health has less to do with doctor’s visits, medicine, and health insurance than you may think—and a lot more to do with addressing barriers that impact your health, such as poverty, environmental hazards, lack of access to healthy food, and a built environment that makes walking and exercise difficult. 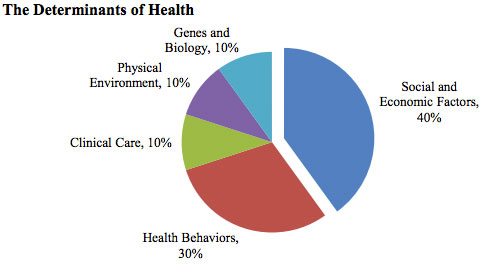 As the above chart, courtesy of the Minnesota Department of Health, shows, genetics and the quality of healthcare only account for 20 percent of health outcomes; the rest concerns factors such as poverty, diet and exercise, and the physical environment—all of which are interlinked, since if you’re poor, you are more likely to live near environmental hazards and less likely to have a walkable neighborhood or be near a healthy grocery store. Nonprofit Quarterly covered some foundation initiatives focused on addressing these barriers to health and wellness here.

How does this play out? Last month, Nonprofit Quarterly wrote about lead poisoning, citing a study that showed cost savings that would result from lead abatement. But even more important than the money is the impact on children’s health. A 2013 Centers for Disease Control study found lead poisoning in 1 in 38 of America’s children or 535,000 young Americans. In some neighborhoods, this number is far higher: As an award-winning series from Reuters documented, “In some pockets of Baltimore, Cleveland and Philadelphia, where lead poisoning has spanned generations, the rate of elevated tests over the last decade was 40 to 50 percent.” Nationally, one in five cases of attention deficit hyperactivity disorder (ADHD) are traceable to lead poisoning.

More broadly, as this Robert Wood Johnson graphic shows, our lives are at stake. Disturbingly, where you live can alter your life expectancy in metro New Orleans by up to 25 years. (Other city maps can be found here, as well as from this site housed at Virginia Commonwealth University). Such data leads to the common public health mantra that “your zip code matters more than your genetic code.” A 2011 article in the American Journal of Public Health that chose a single year—2000—for morbidity analysis estimated that, “Approximately 245, 000 deaths in the United States in 2000 were attributable to low education, 176, 000 to racial segregation, 162, 000 to low social support, 133, 000 to individual-level poverty, 119 ,000 to income inequality, and 39, 000 to area-level poverty.” The authors also found that:

Slowly but surely, these numbers are driving major change in healthcare. As Bill Frist, former Republican Senate Majority leader from Tennessee, notes, prodded by Obamacare, the Center for Medicare and Medicaid Services, the largest single payer for hospital care in the United States, is shifting payment from “volume to value”—or, as Frist helpfully puts it, “paying for health outcomes rather than simply service volume.” But if most health outcomes have to do with matters outside the hospital walls, what is a hospital to do?

With 30 percent of our population in poverty and bearing a huge burden of disease, the health care institution needs to be at the table, working with our communities and supporting the improvement of education, commerce and health…. The missing link is whether people have a sense of control over their lives, something that requires individuals and communities to have agency.

In Los Angeles, UCLA’s medical center has reduced costs and improved health outcomes by hiring 30 community health workers who, “work on patient advocacy and linkage to resources, and they really deliver care, taking a minute to understand social determinants of health by asking questions and developing relationships with patients.” In Kalamazoo, Michigan, the nonprofit hospital reduced the uncontrolled diabetes rate among its patients by 29 percent in 90 days, by using a community health care model like UCLA’s, where “care coordinators” conducted home visits to help patients with their medication, diet and exercise regimens.

Miliard’s article focuses on Susan Hawkins, senior vice president of population health at Henry Ford Health System in Detroit, Michigan. Hawkins says that her nonprofit is “working with a company that’s helping it identify a broader array of socioeconomic factors for patients—not just their ethnicity and the language they speak at home, but information about how stable their housing is and their access to reliable transportation.”

Those are all non-clinical in nature but they have a tremendous impact…. By assessing those social factors, as well as the patient’s motivation to change unhealthy habits—smoking cessation, for example—the health system can often then connect them to a community resource for help, she said.

Clearly all of this creates a new opportunity for community partnerships—such as between nonprofit hospitals and nonprofit community development corporations.

As Hawkins observes: “We’re all playing in a bigger sandbox now…. It’s not just our four walls.”—Steve Dubb