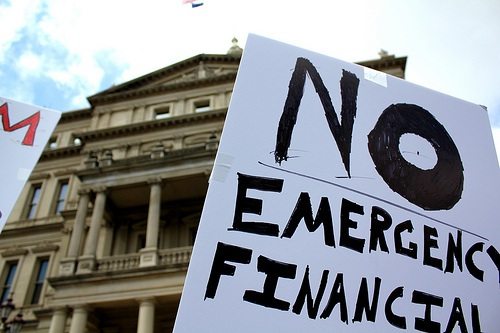 With the budget sequester being implemented by the federal government, nonprofits around the country are trying to guess how the cuts will trickle down into their programs and the communities they serve. Imagine being a Detroit nonprofit. You’re trying to figure out sequestration at the same time as Gov. Rick Snyder (R-Mich.) declares that Detroit is officially in a state of financial emergency and must be prepared to turn over governance to an emergency fiscal manager.

Mayor Dave Bing said he is going to explore his options before announcing his official response during the 10-day period in which the City can appeal, though he didn’t sound like he was gearing up for much of a fight. Knowing the tenor of the Detroit City Council, however, we can’t imagine that it will accept Snyder’s decision without vociferous complaint. Detroit State Sen. Coleman Young II (D) warned that the state is “going to go in there and sell off all our assets [and] [w]e’re not going to have anything left.” Of course, some people might suggest that Detroit doesn’t have a lot left to begin with, in light of its estimated $327 million budget deficit and the backbreaking weight of $14 billion in long term debt.

Where are nonprofit leaders on the takeover? Crain’s Detroit Business reported that the president of the Detroit branch of the NAACP, Rev. Wendell Anthony, denounced the takeover and somehow compared it to the U.S. invasion of Iraq. John Philo of the nonprofit Sugar Law Center said that the use of emergency managers is unconstitutional and the idea that an emergency manager could “come in and fix things in 18 months is unrealistic.”

Nonprofits will be lining up for and against the notion of a state takeover of Detroit’s finances, though we expect more will voice opposition to the idea than support for it. Within all of this mess, our thoughts go to the nonprofits that that still are trying to function and deliver help to people in need. Only days ago, Mayor Bing announced a partnership between the city and a new nonprofit called the Detroit Blight Authority that aims to tear down abandoned properties in the Eastern Market area. The nonprofit is recycling 80 percent of the debris and covering the cleared sites with low maintenance vegetation. Notwithstanding the city’s financial freefall, Mayor Bing had committed to demolishing 10,000 vacant properties that constitute a distinctive category worse than any standard concept of urban blight.

The Detroit Blight Authority reflects the entrepreneurial creativity Detroit nonprofits have used to respond to public needs despite the self-immolating tendencies of the city’s governing decision-makers. What happens to the bevy of Detroit nonprofit initiatives caught between the gusty winds of sequestration on one side and the hollowing out of Detroit’s local government decision-making authority on the other? –Rick Cohen