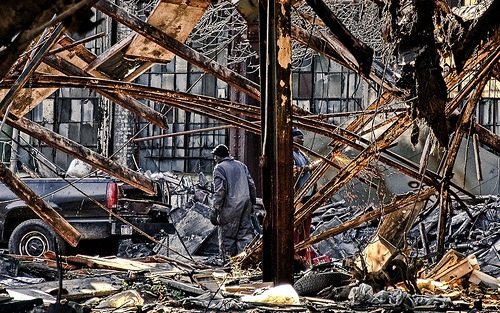 Why spend so much time commenting on Detroit? Because the city of more than 700,000 people is bankrupt, turning the water off on over one hundred thousand water customers, and now axing the contracts of nonprofit human service groups that have been providing safety net services for Detroit’s legions of poor people residing in devastated neighborhoods. Is there any hope?

Inell Byrd, a 41-year-old home health aide still living in Detroit’s North End, told New York Times writer James Eligon, “I know the city is coming back.” That was the concluding sentence of Eligon’s moving portrait of residents of the North End, east of the Woodward Corridor of Detroit, and how they are holding on as they watch their city fall apart beneath them. Even in Ms. Byrd’s case, the story is heart-wrenching. Working two jobs to take care of her retired husband, who cannot work due to having suffered two strokes, Ms. Byrd owes $4,500 in back taxes. She has contemplated selling her home, but she pulled the house off the market after getting mostly lowball offers from white buyers.

Eligon also writes about Banika Jones, a 34-year-old woman living in the North End. After overcoming suspicions of the white social activists coming into her neighborhood, she now volunteers with one of the white-led groups, the Michigan Urban Farming Initiative. Almost in passing, Eligon notes that Jones lives in a home with no electricity and no running water because, he says, she cannot afford to pay for utilities.

Despite the concerns that the Detroit Water and Sewerage Department was shutting off the water on poor people in violation of international human rights covenants, WDIV (Channel 4 in Detroit) reported over the weekend that the Water Department is going door-by-door, block-by-block shutting off this basic service on residents who are delinquent in their water payments—some 1,500 to 2,000 customers a week, according to WDIV. The city says that residents owe over $100 million in unpaid bills. Half of the city’s water customers owe more than $150, and the average unpaid water bill is $560.

Across the border, the view of the Hamilton Spectator is that Detroit is becoming like a “pioneer town,” with no water services for increasing numbers of hard-pressed residents. Although Nonprofit Quarterly was all over this story early on, commenting on the efforts of Detroit-area advocacy groups such as the People’s Water Coalition as well as Congressman John Conyers to bring this issue to the attention of Congress, the White House, and even the United Nations, the uptake by mainstream network and cable national TV news organizations has been slow. Finally, NBC Nightly News picked up the story just recently.

Something isn’t connecting on this story. Comments abound in various places that Detroiters who are behind on their water bills are getting what they deserve, that it’s time for Detroit to start getting people to pay their water bills, electricity bills, and property taxes. Somehow, the notion that water service is not a discretionary luxury purchase isn’t getting through.

Unless plans change, on Monday morning, the Detroit Water Brigade and Congressman Conyers plan to hold a press conference announcing their plan to “launch a volunteer drive to deliver immediate relief to thousands of families affected by water shutoffs and advocate for an immediate moratorium on shutoffs and a Water Affordability Plan for all residents.” The moratorium is obviously important, but volunteer relief in a city that is already suffering from a dearth of services of all sorts isn’t much of a response. The moratorium should be accompanied by state and federal intervention to rectify the situation of residents getting unanticipated delinquency bills, facing higher than expected bills that are all-but-assuredly due to leaking water pipes, and being deprived of a requisite element of civilized society.

We suspect that Congressman Conyers is not going to pin his hopes on volunteers accompanied by the expectation that Detroit Water will have an epiphany of human concern. Governmental action—other than the turn-offs by the Detroit Water Department—is needed now before a human rights crisis becomes a human rights tragedy.—Rick Cohen