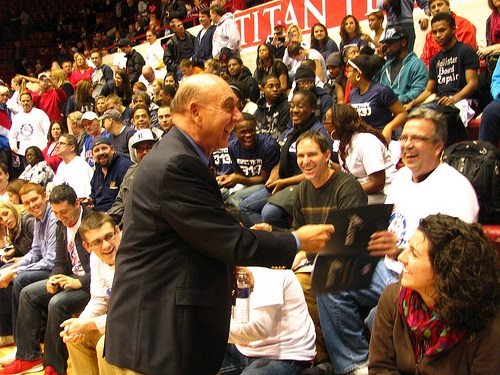 If you’re a sports fan and listen to ESPN, you have heard the over-the-top commentary of basketball commentator Dick Vitale, who splices his commentary with assorted descriptions and monikers ending with “baby.” “Dickie V” recently tweeted: “I am already tired of the POLITICAL ADS – A waste of CASH – much BS BABY! Give those dollars to THOSE IN NEED / DICKIE V 4 PREZ.”

Even if you don’t like his sports analysis, give Vitale credit for his strong commitment to charity, particularly the VFoundation, which is named after the late North Carolina State University basketball coach Jim Valvano, who died of cancer not long after his team surprisingly won the NCAA basketball championship. Vitale puts in his time for the VFoundation and other charities, and we get his message here. According to NBC News, spending on political advertising so far in this presidential campaign has topped $512 million, more than all of the political advertising done in the 2008 campaign, and we still have months to go in the Obama/Romney electoral scrum.

The ads are getting more ugly, stupid, and nearly ubiquitous, especially if you add in the “independent” expenditures for political ads against congressional candidates. It’s hard to argue with Vitale’s judgment that these funds could be much better spent for “THOSE IN NEED.” Hopefully, the next time Vitale appears on ESPN’s “Mike and Mike in the Morning,” one of his regular gigs, he’ll bellow, “REIN IN THOSE 501(c)(4) SOCIAL WELFARE ORGANIZATIONS, BABY!”—Rick Cohen