Does This National Advocate “Get” Nonprofits? A Plea for More Rigor

Part of what NPQ considers its job to be is to question questionable research findings about nonprofits and philanthropy. As such, we must challenge a report released by Independent Sector (IS) last week (which it did in conjunction with Washington Council Ernst and Young) that concluded mid-sized nonprofits have suffered a decline in revenue and individual giving that has forced them to limit needed services and lay off, furlough, or cut pay and benefits for their employees. The summary went on from there to detail the damage those workers suffered.

The conclusion actually sounds plausible, but we have concerns both about the data and the potential for misunderstanding just who the sector comprises. Those findings were reached on the basis of a mere 110 responses to a “broad” survey. Further, those 110 organizations, says the writeup, represent a collective $9.1 billion in annual contributions and revenue.

On the first point, we noticed that one of our sister publications did IS the favor of reframing the survey as a “spot check,” which is still an uncomfortable fit, but better. On the second, we figure that $9.1 billion comes out to more than $80 million per organization; in the eyes of most of us in the nonprofit sector, that is not mid-sized, but very large. For Ernst and Young—and, we suppose by extension, Independent Sector—mid-sized is defined as between 500 and 5,000 employees, and they attest these 110 organizations meet that criterion.

GuideStar/Candid has some stats on nonprofit organizational size in the US: 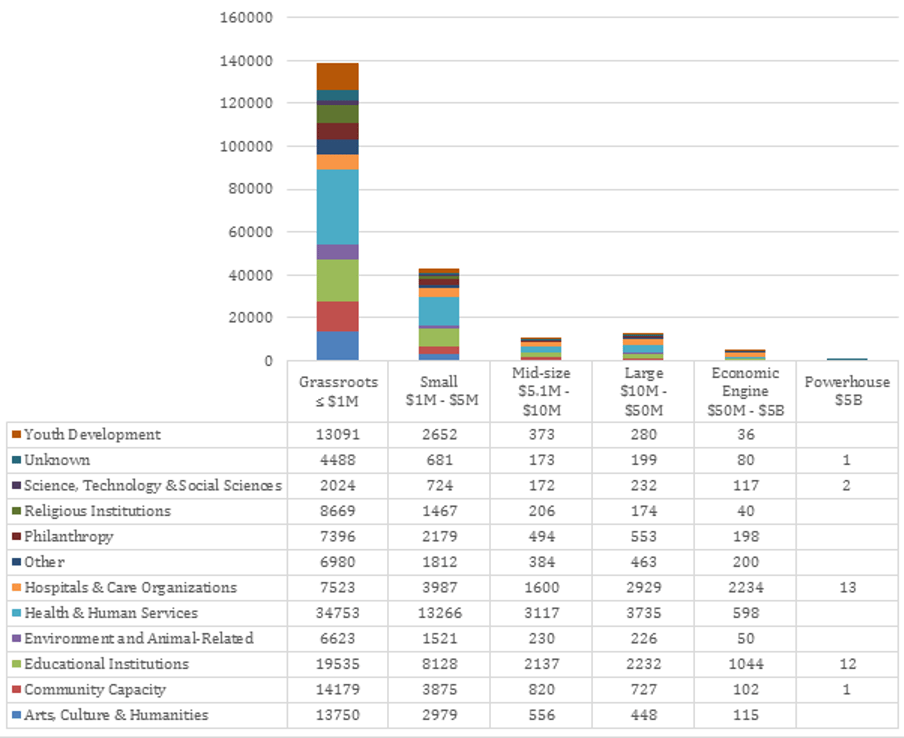 GuideStar asserts in the blog from which this chart is drawn that “the majority of nonprofits (66.3 percent) have annual budgets of less than $1 million,” and the proportion of nonprofits with budgets over $80 million is absolutely minuscule.

Why do we care? For the same reason we care that small businesses are recognized, valued, and supported as the backbone of the country’s economy, and because we want the legislators to whom this research is directed to recognize who we’re talking about when we suggest that universal charitable deduction is a necessary step to maintaining the vibrant human infrastructure of our communities. We also want the broader public to appreciate how thin our margins might be and how critical we are to this country’s democratic and service infrastructure.

Let’s be clear—these research findings are probably solid in relation to who was surveyed, and we do feel bad for the troubles of the top two percent of nonprofits, but they do not reflect the realities or needs of most of the sector. Poorly designed surveys tend to proliferate around our sector—and NPQ regularly tries to challenge them—but, in general, nonprofits deserve a more rigorous approach that does not lead us all astray. We want IS to do a better job of accurately representing the contributions and realities of the large majority of this diverse sector instead of looking to mimic the image of big business when making a case for providing tax incentives for donations from ordinary people.

And, lest this be seen as a plea for more money for research (which we do think is necessary), this problem isn’t one that extra dollars will simply solve. It’s about caring for data and strategy. Mid-sized nonprofits exist all across this country, feeding people, sheltering people, and advocating for the rights of ordinary people to be recognized. That should be portrayed accurately and rigorously to lawmakers by our advocates.

Independent Sector did not return a call for comment by publication time for this article.