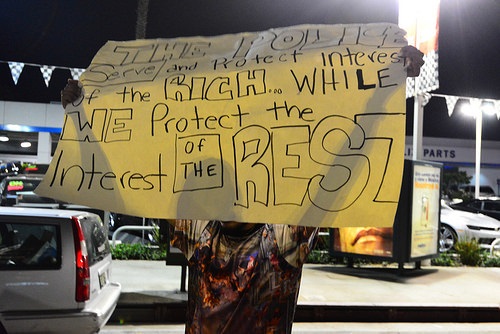 While the U.S. Justice Department declined to file civil rights charges against Officer Darren Wilson for his shooting of an unarmed black teenager (and a local grand jury declined to indict Wilson), Justice did conclude in a report released this week the Ferguson police department to be racially biased. As evidence, the Ferguson police had routinely violated the constitutional rights of black residents through practices such as arrests without probable cause, traffic stops without reasonable suspicion, and the disproportionate use of excessive force against black people. In other words, the racially biased Ferguson Police Department, regardless of Wilson’s shooting of Michael Brown, had violated federal laws and the 14th Amendment of the Constitution guaranteeing equal protection under law.

In Ferguson, with a population that is two-thirds black, the Justice Department cited distressing statistics of racial bias on the part of the police and, notably, the local courts. As summarized by Guardian writer Jon Swaine, the indications of racial bias are widespread:

“The [DOJ] review found 95% of people detained at the city jail for more than two days between April and September 2014 were black. During the same period, black defendants were found to be 68% less likely than others to have their cases dismissed by judges in the city’s controversial municipal court system.

“The review also found that 85% of all drivers stopped by police were black, and that African American drivers were twice as likely as white drivers to be searched during these stops but yet more than 25% less likely to be found in possession of illegal substances or goods. Black drivers were sharply more likely than their white counterparts to be cited for driving offences when these were observed by police officers in person rather than detected by radar or similar technology.

“Police officers were found to have overwhelmingly charged African Americans with ‘petty offenses’, according to the law enforcement official. Black people accounted for 95% of charges relating to walking on roads, 94% of ‘failure to comply’ charges and 92% of all charges of disturbing the peace.”

Do remember that the Ferguson police force, like the Ferguson municipal government in general, is overwhelmingly white. The statistics and the police department’s policies and practices were clearly sufficient for Justice to reach a finding of racial bias, but police e-mails were also useful embellishment, particularly one official email referring to President Obama, suggesting that he would not serve out his full term as President because “what black man holds a steady job for four years?”

Expect that the Ferguson Police Department will enter into a consent decree with the Justice Department around an agenda of practices meant to remedy the department’s racially biased practices. The sad part of this story is that it took the death of a black teenager to prompt this review. Where were the public interest watchdogs in metropolitan St. Louis who might have been monitoring and revealing these practices before Michael Brown ended up lying in a pool of blood for four hours in the middle of a Ferguson thoroughfare?

There is another consent decree to be negotiated, a moral rather than legal consent decree. It is for the nonprofit sector to remember that its overarching composite mission is to protect people who might be victimized by governmental agencies, corporations, and even nonprofits themselves. In the current environment of nonprofits cutting deals with businesses and governments in public-private partnerships, nonprofits should also remember that they also stand apart from those sectors, which enables them to be effective watchdogs on behalf of people who need protection against agencies run amok, racially biased or otherwise. It shouldn’t take a teenager gunned down in a street and a subsequent federal investigation for nonprofits everywhere to take action against the de facto governmental racial animus that the Justice Department found in Ferguson.—Rick Cohen