DOMA and the States: What are the Next Strategic Steps for LGBT Groups? 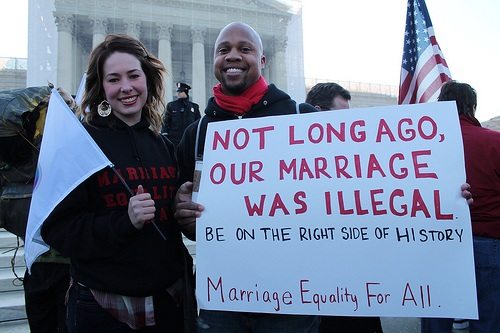 Lesbian, gay, bisexual, and transgender (LGBT) organizations are celebrating Wednesday’s Supreme Court rulings on the Defense of Marriage Act (DOMA) and California’s Proposition 8, major victories in the fight for civil rights. The Court overturned DOMA’s Article 3, which prohibited the U.S. government from recognizing legal marriages of gay women and men and denied gay married couples over 1,100 benefits enjoyed by their straight counterparts. The Supreme Court justices also let stand a lower court ruling that struck down Proposition 8, a ballot initiative that defined marriage as between one woman and one man.

Because of DOMA, gay U.S. citizens were not able to petition for green cards for their foreign-born spouses. Rachel B. Tiven, Executive Director of Immigration Equality, said, “Many of our families have waited years, and in some cases decades, for the green card they need to keep their families together. Couples forced into exile will be coming home soon. Americans separated from their spouses are now able to prepare for their reunion. Today’s ruling is literally a life-changing one for those who have suffered under DOMA and our discriminatory immigration laws.”

“Antiquated laws like Proposition 8 and DOMA disproportionately harm LGBT people of color, and ultimately our nation,” said Sharon Lettman-Hicks, Executive Director and Chief Executive Officer of the National Black Justice Coalition, in a statement released after the rulings were announced. “Today is a victorious day for our community, our families, and our love.”

Chad Griffin, president of the Human Rights Campaign, also applauded the development, but pointed out “there’s much work ahead of us to ensure that every couple can fully enjoy the recognition Justice Kennedy so eloquently wrote about in the majority opinion in Windsor.”

Although gay married couples are now entitled to federal benefits, access can be an issue in states that do not have marriage equality. As NPR’s Liz Halloran explains, “Some federal agencies adhere to what is known as a ‘place of celebration’ standard. That means no matter where a couple is legally married anywhere in the world, the union is recognized for the purpose of federal benefits. But other agencies, including the Internal Revenue Service and the Social Security Administration, hew to a ‘place of residence’ standard. Marriage has to be recognized in the place the couple is living for them to be eligible for those federal spousal benefits.”

“We have an obligation to ensure every same-sex couple—whether they live in Arkansas or New York, Kansas or California, can share in today’s emotional and deserved victory,” said Griffin. “We have momentum on our side, and it’s only a matter of time until the remaining parts of DOMA are entirely repealed.”

LGBT groups are already looking ahead at what remains to be done. Aside from fully getting rid of DOMA and establishing marriage equality in all states, advocacy groups are also working at addressing the many other issues faced by the LGBT community, such as workplace discrimination, violence, and the marginalization of queer people of color.—Erwin de Leon